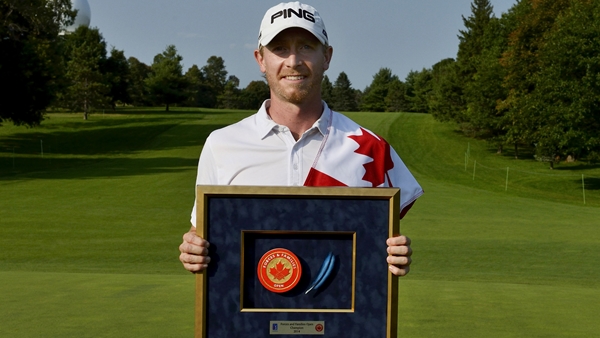 Greg Machtaler, winner of the inaugural event in 2014 (Photo via Canadian Armed Forces)

“The Ottawa area has such a strong golf community, and we want to do everything we can to make sure the National Capital Open to Support Our Troops becomes an integral part of that community,” said PGA Tour Canada President Jeff Monday. “With the support of Canadian Forces Morale and Welfare Services, we’re confident this event will continue to grow and make a strong impact in the community.”

Former PGA Tour member and Ottawa native Brad Fritsch will return as the event’s Ambassador of Golf after lending his support to the event in its inaugural year. Fritsch is coming off an impressive seven-stroke victory at the Web.com Tour’s Qualifying School, where he earned exempt status for the 2015 season and will be looking to continue his solid play that included two top-10 finishes in his last three starts of the 2013-14 PGA Tour campaign.

Doug Langton, Associate Director General, Canadian Forces Morale & Welfare Services, will serve as the Tournament Director, replacing John Randolph, who helped launch the event in 2014. Randolph will continue to support the troops, concentrating his efforts with Forces & Families in the Greater Toronto Area.

“On behalf of PGA Tour Canada and everyone who was involved with the event last year, I would like to thank John Randolph and Forces & Families for their efforts in launching this event in 2014,” said Monday. “Doug and his team have been involved in a support role with the Tournament since day one and we are extremely confident in their abilities to expand the event’s profile and impact.”

“Our top priority is to engage the Ottawa community and grow the National Capital Open to Support Our Troops into one of the top events in the region moving forward,” said Langton. “A PGA Tour Canada event is a tremendous vehicle to raise support and awareness for the men and women of the Canadian Armed Forces and to drive economic activity in the area, and we look forward to seeing this event grow in 2015 and beyond.”