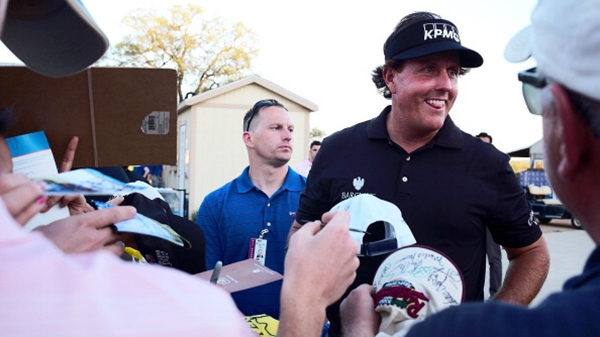 SAN ANTONIO – Phil Mickelson made the cut on the number in the Texas Open on Friday, blasting out of a greenside water hazard to 5 feet to set up a birdie on the final hole.

Mickelson shot a 2-under 70 after opening with a 77 – his worst score of the season – on TPC San Antonio’s AT&T Oaks Course. Lefty was 11 strokes behind leader Steven Bowditch, the Australian who had a 67 to reach 8-under 136.

Mickelson was in the stream that runs in front of the 18th green after attempting to reach the par 5 in two from 288 yards with a 3-wood.

“I needed to make a birdie to have a chance at playing tomorrow,” Mickelson said. “Fortunately, barely went in, and it looked like the water overlapped the grass. It was not that hard of a shot.”

Bowditch holed out from 83 yards for an eagle on the par-4 12th. The 30-year-old topped the leaderboard at the end of a round for the first time in his PGA Tour career.

“My wedge shots have been pretty good,” Bowditch said. “I was trying to hit (the one on No. 12) a little past the pin and hope it came back to a reasonable distance. Got lucky.”

He closed the round with a double bogey on the par-4 ninth, taking two chips to get out of the heavy rough.

Chad Collins and rookie Andrew Loupe were a stroke back. Collins shot 66, and Loupe had a 70.

Mickelson has struggled this year and entered the Texas Open for the first time in 22 years to put his game under competitive conditions as a preparation for the Masters. He knew he had a chance to make the cut even after a bogey on No. 15 dropped him to 3 over.

“I was on the green for five minutes and (the 3-over score) went from 74th to 71st in five minutes,” Mickelson said, “so I figured that 3 over had a pretty good chance of making it because the scores were coming back.”

On the 18th, Mickelson pulled off his left shoe and rolled up that pants leg and gave it a shot with his foot in the water.

“It’s important that I get more mentally into the round like I did today,” Mickelson said. “Yesterday, I was very sloppy. I like the way I’m driving the ball. My speed is back. My back feels great. My body feels great, and I’m able to hit the ball hard again.”

Plus, after having 17 putts on his second nine Thursday, he opened his second round Friday with one-putts on eight of his first nine holes. He was 3 under for the round until taking two shots to get out of a greenside bunker and bogeying No. 8.

Only two of the top 15 players on the leaderboard are in the top 100 of the world ranking. Sixth-place Kevin Na is 78th in the world and ninth-place Zach Johnson is 10th.

Ottawa’s Brad Fritsch didn’t make the cut. He improved on an opening-round 80 with a 74 Friday, but his 10-over total meant he missed his fifth cut in nine starts on the year.