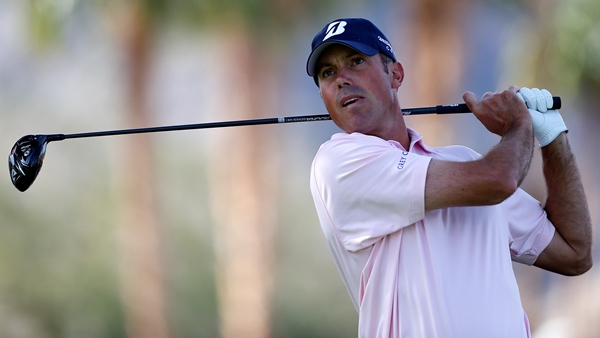 LA QUINTA, Calif. – Phil Mickelson got most of the attention in his return to competition after a four-month break. Blake Adams got a lot more out of his comeback round.

Mickelson shot a 1-under 71 on Thursday in the Humana Challenge in his first event since the Ryder Cup, leaving him eight strokes behind leader Michael Putnam.

“Even though this score is the worst I’ve had in a long time, in months, I’m excited about my game and getting back out tomorrow,” Mickelson said. “I can’t wait to get started again, because I just feel like I played a little tight today, kind of steered it a little bit.”

Adams had a 64 on PGA West’s Jack Nicklaus Private Course in his return from hip replacement surgery. He last played a PGA Tour event in March and had surgery in July.

“Very, very blessed to be back out here,” Adams said. “It’s been a long road to get back. You never know what you’re going to get when you have total hip replacement.”

“It was the first round in four months and I’ll loosen up,” Mickelson said. “Hopefully, the way I’m playing will show in the score. But today, it just didn’t.”

The 44-year-old Mickelson, the 2002 and 2004 champion, is winless in 27 PGA Tour starts since the 2013 British Open. He has lost weight and gained strength working with trainer Sean Cochran during the long break from competition.

“My body hasn’t felt this good in years,” Mickelson said.

The 40-year-old Wilson won the 2012 tournament for the last of his five PGA Tour titles.

“I came in feeling OK, nothing great about the game, but it was ideal today,” Wilson said. “I made some saves when I needed it and capitalized on my good shots.”

Defending champion Patrick Reed had a 65 at La Quinta. He’s coming off a playoff victory over Jimmy Walker two weeks ago in Hawaii in the Tournament of Champions. Last year, Reed shot three 63s to open a seven-shot lead and closed with a 71 for a two-stroke victory.

“I feel like I left a lot out there, but it’s always good to shoot 7 under,” Reed said. “My confidence is as high as it could be and the main thing is just not getting ahead of myself and not really being over-confident where I take too many unnecessary risks.”

Playing partner Matt Kuchar, the highest-ranked player in the field at No. 11 in the world, also had a 65. He closed with a bogey.

Canada’s Nick Taylor opened with a 66 and held a share of 11th, while Graham DeLaet was two-shots back after a 68. He had a share of 29th.