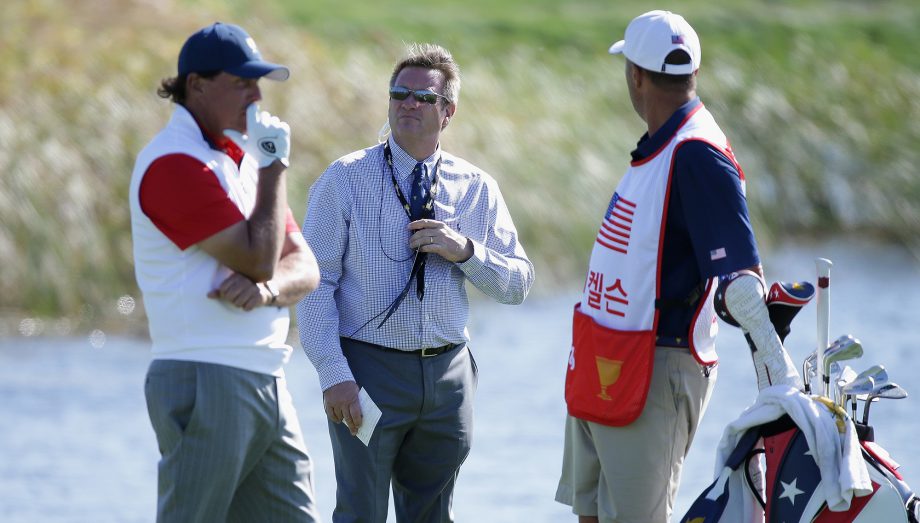 INCHEON, South Korea – Phil Mickelson has played 49 matches in the 21 years since the Presidents Cup began.

And he learned something new Friday.

For starters, Mickelson was not aware of the one-ball rule in fourballs and singles matches, meaning that players can’t change the model of their golf ball during the match. He also didn’t realize that a match could go from all square to 2 up in just one hole.

“That’s the first time I’ve ever heard of that happening,” he said.

It turned out to be a costly mistake when Mickelson and Zach Johnson halved their fourballs match with Jason Day and Adam Scott, and that allowed the International team to pull within one point of the Americans going into Saturday.

All that was overlooked because Mickelson didn’t know the rules – and in this case, neither did the rules committee.

It was a double blunder, and it started when Mickelson reached into his bag for a golf ball with a slightly harder cover that he thought would help him reach the green in two on the par-5 seventh hole. Mickelson found the fairway and was sauntering to his ball when he noticed U.S. captain Jay Haas following them.

“I was talking with Jay and I just thought, ‘Gosh, I’m going to ask. I’m sure it’s not an issue,'” Mickelson said. “And it turns out that there was a one-ball rule and it was an issue. As a player, you need to know that. You need to know the rules, and if you have a question, you do it beforehand.”

No one knew the ramifications.

The penalty for violating the one-ball rule is called a one-hole adjustment, meaning the one hole is awarded to the other team.

But the rules committee erred when it told Mickelson that he was out of the hole, and Mickelson picked up his ball. Because the one-hole adjustment already had been assessed, Mickelson should have been able to finish the hole. He was in the fairway just over 290 yards from the hole, which he could have reached with a good shot.

But he never got that chance. Day made birdie and won the hole, so the International team went 2 up heading to the eighth hole.

“The weird thing was I’ve never heard of a match adjustment penalty,” he said. “I just thought, ‘OK, if I hit the wrong ball, no big deal. Zach will cover me on this hole’ But obviously, that’s not what happened.”

Mark Russell, the senior vice president of rules and competition for the PGA Tour who took the blame for the mistake, said the committee could not go back and let Mickelson finish the hole because “allowing a correction could potentially undermine the strategy” with players on both teams having already hit their shots.

Mickelson had reason to be confused.

The Ryder Cup does not have a one-ball rule when it is played in America, nor does the PGA Championship. So he thought nothing of using a different ball, especially one day after a foursomes match (alternate shot) where teams can switch golf balls on every hole.

Asked to comment on his match, Mickelson smiled and said, “Zach and I had a very uneventful day. We walked away with a tie.”

He took the blame, even though it was shared with the rules staff, saying that he never should have put the staff in that position if he had known the rule. And Mickelson wasn’t bothered that his team had to settle for a halve.

“I feel like we spotted the International’s best team two holes, and they still couldn’t beat us,” he said. “Just saying.