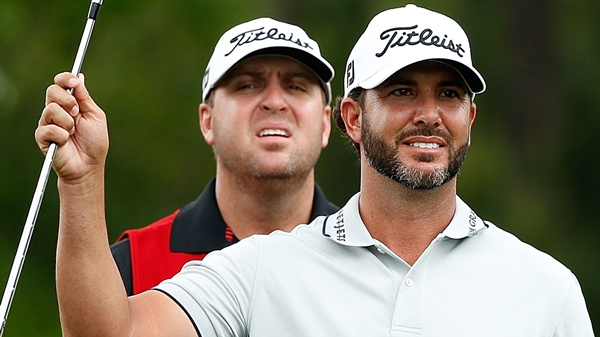 HOUSTON – After his record-tying round Thursday, Scott Piercy let his thoughts drift toward qualifying for the Masters with a win this week.

Piercy tied a tournament record with a nearly flawless 9-under-par 63 to take a one-stroke lead after the first round of the Houston Open.

“It’s the first round,” he said. “If I’m sitting here Sunday, then I’ll be super-excited. If I (keep playing) like I did today, I would say there’s a pretty good chance of that.”

Alex Cejka, in an afternoon group, made four birdies on his back nine – the course’s front nine – to finish with a 64, one stroke behind Piercy.

J. B. Holmes was next at 65, having also gotten to 8-under with four holes to play before finding a fairway bunker with his first shot at No. 6. After badly missing the green, Holmes had to scramble to a bogey.

Piercy, who made five birdies in a row over one torrid stretch during the middle of his round, became only the fifth player to card a 63 since this PGA Tour stop moved to the Golf Club of Houston Tournament Course in 2003. Two of the others, Mickelson in 2011 and Johnson Wagner in 2008, went on to win the championship.

The 36-year-old Piercy, a pro from Las Vegas, missed only one green in regulation and needed just 26 putts. Two days earlier, however, feeling so discouraged by the way he’d been playing of late that it crossed his mind while he was out grinding on the driving range “to go home and not waste my time.”

Piercy, instead, decided to keep practicing. He wound up hitting golf balls for “12, 13 hours. … In the 13th hour, something kind of clicked and I kind of figured it out. On Wednesday, I kind of engrained it, kept working and got pretty good. Today was awesome. It really was.”

Piercy was off the PGA Tour for six months last year while recovering from elbow surgery and said he still hadn’t felt quite right before arriving in Houston. But he liked his form Thursday the moment he first swung his driver. He began the day with a birdie on No. 10 and capped it by sinking a 30-foot birdie putt on the No. 9, his final hole.

“Everything went right,” said Piercy, who last won on the Tour at the RBC Canadian Open in 2012. “I hit the ball so good. It’s been building. I kept hitting good shot after good shot. By the end, I was (only) trying to make birdies.”

Teeing off 20 minutes before Piercy, Mickelson made himself the early front-runner by chipping in for birdie on his first hole, then turning the corner at 3-under, about the time Piercy began his birdie run. Mickelson reached 7-under at one point but bogeyed the par-three ninth, his final hole.

The three-time Masters champion, one of at least 36 players in the Houston field who are headed to Augusta National next week for the season’s first major, had skidded to a final-round 76 Sunday in the Texas Open. So, his late lapse here notwithstanding, Mickelson called his effort “a good round, a good start to the tournament. I got off to a quick start, birdieing three of the first four holes, and kept it going.

“The course is in pristine condition. The greens being soft are going to allow us to get more aggressive (aiming for) the pins and make some more birdies. The scores are going to be low” he said. “I’m just glad I was one of them.”

Piercy wasn’t the only one thinking about qualifying for The Masters.

Canada’s Graham DeLaet opened with a 5-under 67.