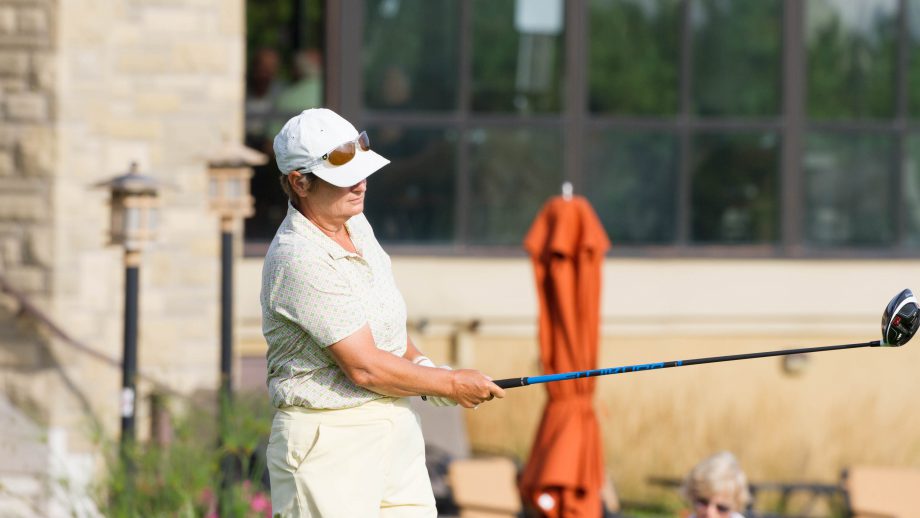 FONTHILL, Ont. – Uxbridge, Ont., native Gail Pimm fired a 1-over-par 73 on Tuesday to top the leaderboard in the Senior and Mid-Master divisions during round one of the Canadian Women’s Mid-Amateur & Senior Championship at Lookout Point Country Club.

Pimm, who also has a share of the lead in the Mid-Amateur division, had two birdies in blustery conditions during the opening round, including one on the par-5 9th hole.

“It was really windy, and it was very tough conditions to play in because of the wind and the heat,” said the 2018 Senior Women’s Champion of Champions. “I’m used to playing in windy conditions, but I was really surprised how windy it was.”

With wind speeds forecasted to be even stronger for tomorrow, Pimm plans on sticking to her routine and game plan to keep the ball in the fairway.

The competition is sure to be intense during Wednesday’s second round. Three players share a piece of second and chase the lead, all of whom are no strangers to winning the Women’s Senior Title. Defending champion Sue Wooster (Australia), three-time champion and Canadian Golf Hall of Fame honoured member Mary Ann Hayward (St. Thomas, Ont.) and 2016 champion Judith Kyrinis (Thornhill, Ont.) carded matching 77s sit 4 back of Pimm.

Wooster, Hayward and Kyrinis also share second place in both the Mid-Amateur and 40-and-over Mid-Master division. If Wooster manages to pull ahead of the pack, she would be only the second player to successfully defend the Mid-Master title. Fellow competitor Hélène Chartrand is the only person to have accomplished that feat after winning the title in 2013 and 2014.

The Port Alberni, B.C., talent, who started on the back-nine, got off to a strong start after registering three back-to-back birdies across her first nine holes.

“Honestly if you would have offered me 73 on a silver platter on the driving range with the wind we had going on, I would have taken it in a second,” said the 35-year-old. “It’s been a couple of years since I played in this event and even a couple more years since I won  so to be under (on the front), I was feeling pretty awesome.”

However, Proteau struggled against the wind on the front-nine, finishing at 1 over to share the Mid-Amateur lead with Pimm.

“It’s kind of good to get that out of the system and hopefully I’m somewhere around the top of the leaderboard,” added Proteau. “At the end of the day this is just the starting day anyways, the real stuff happens the next couple of rounds.”

Jackie Little – who won this event in 2007 and 2008 – leads the 60-and-over Super Senior division, separated from Canadian Golf Hall of Fame member and three-time Women’s Senior Champion Alison Murdoch by one shot. Ruth Maxwell rounds out the top-three in the division at 8 over par.

The defending Ontario team — Judith Kyrinis (Thornhill, Ont.), Canadian Goll Hall of Famer Mary Ann Hayward (St. Thomas, Ont.) and Terrill Samuel (Etobicoke, Ont.) — leads the inter-provincial competition at 10 over par. British Columbia is six strokes behind them in second at 16 over par, while Alberta sits in third at 19 over par.