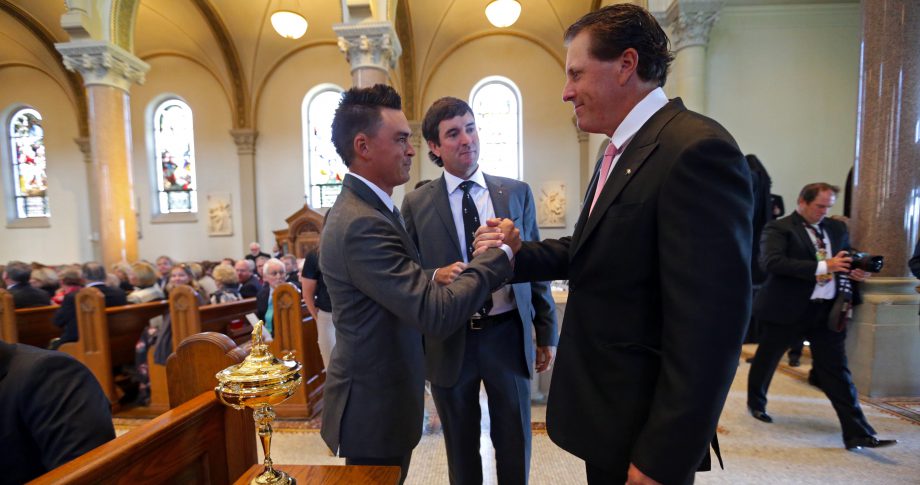 LATROBE, Pa. – With a large tear forming in his left eye, Jack Nicklaus asked everyone from the elite to the everyman to remember the time Arnold Palmer touched their lives during an emotional farewell to the King on Tuesday.

“I hurt like you hurt,” Nicklaus said. “You don’t lose a friend of 60 years and don’t feel an enormous loss.”

The service at Saint Vincent College in Palmer’s hometown was filled with just as much laughter and warmth from stories of the most significant player in the modern game. The basilica at the college was packed with golf’s biggest names from around the world.

Charlie Mechem, the former LPGA commissioner who became one of Palmer’s most trusted advisers, referred to them as the “elite battalion” of Arnie’s Army.

Palmer died Sept. 25 in Pittsburgh as he was preparing for heart surgery. He was 87. His private funeral for family members was Thursday.

“We were looking down at the air strip and the fog just suddenly lifted,” Ernie Els said Tuesday after landing in one of several private jets that descended on Arnold Palmer Regional Airport. “This is a beautiful day. We’ve all met different people in life. He was a man who didn’t change. It didn’t matter if you cut the grass or you were a president. He was the same with everybody.”

Palmer’s co-pilot, Pete Luster, flew his plane around Saint Vincent College for nearly an hour before the service, tipping the left wing as he zoomed by.

Mechem set a happy tone by pointing to a large photograph of Palmer with a grin that made everyone feel so important. He asked the crowd to remember the Palmer who hitched up his pants and gave a thumbs-up.

“There’s an old saying that there are no irreplaceable people,” Mechem said, his voice cracking toward the end of the ceremony. “Whoever made that line didn’t know Arnold Palmer. There will never be another.”

The service was another reminder that Palmer was not the greatest golfer who ever lived, or even the best from his generation. He just had the greatest influence through television, through marketing and mostly through eye contact.

PGA Tour Commissioner Tim Finchem tried to explain Palmer’s popularity by mentioning his attacking style of golf, his appeal on television and the way he carried himself.

“He had this other thing,” Finchem said. “It was the incredible ability to make you feel good – not just about him, but about yourself. I was amazed by how people reacted to him. He took energy from that and turned right around and gave it back.”