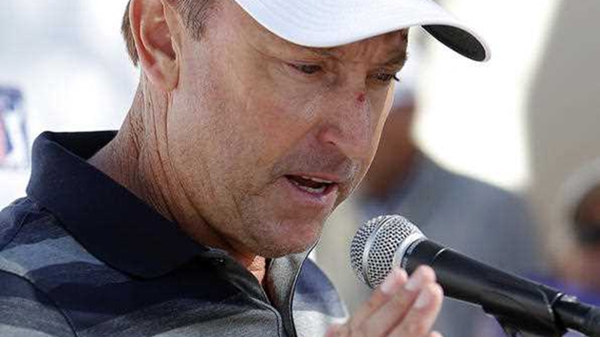 PEBBLE BEACH, Calif. – A police detective investigating Robert Allenby’s ordeal in Hawaii said three people seen leaving a wine restaurant with him are not believed to be connected to the case and that the Australian golfer did not go to a strip club that night.

Det. John McCarthy of the Honolulu Police Department said in a telephone interview Thursday night that evidence shows Allenby was not in the Club Femme Nu in the early morning of Jan. 17 when his wallet, credit cards, cash and phone were taken.

“There is no evidence he was ever in that strip club,” McCarthy said. “Our investigation shows he was not at Club Femme Nu.”

McCarthy said several Australians were in the strip club, but not Allenby. “It was a case of mistaken identity,” he said of reports indicating Allenby was there.

Patrick Owen Harbison, 32, was arrested Wednesday on second-degree identity theft, second-degree attempted they and unauthorized possession of confidential information, police said. That part of the case has been turned over to prosecutors.

He was arrested in the Oahu Community Correctional Center where he was being held on a contempt warrant for an unrelated case. Police said Harbison has five felony convictions, including a felony drug conviction.

Still to be determined is what happened to Allenby after leaving Amuse Wine Bar on the night after he missed the cut in the Sony Open.

The saga generated interested when Allenby took a photo of his scraped and bloodied face and posted it to his Facebook page after he got back to his hotel. He first said he was beaten, robbed and thrown from the trunk of a car. He later said he was told that by a homeless woman who helped him escape from a park.

Allenby said two weeks ago at the Phoenix Open that “my story stays exactly the same,” though he had no memory of what happened during a 2 1/2-hour period from leaving the restaurant to waking up in a park that turned out to be no more than a block away.

He said video from the restaurant showed him leaving with three people he didn’t know. McCarthy said those people just happened to be leaving the restaurant at the same time, and video shows them returning minutes later.

Allenby said Thursday night that police have told him he was in the same place during the time he can’t remember. “On the ground, laid out cold,” he said. He said police learned this from talking to homeless people in the park.

One homeless man, Chris Khamis, previously told the Honolulu Star-Advertiser that Allenby injured himself by passing out and hitting his head on a rock.

Allenby said a blood test four days after the incident came back negative, and that he had his head scanned to make sure there was no further injury. He said that came back clear and that he asked the doctors about his memory loss.

“Apparently if you have any concussion, it takes about six weeks for stuff to come back,” he said. “But if you’ve been drugged, they say it can never come back. I remember absolutely nothing. Trust me, every day, every night I’ve thought about it. The only reason I know I left Amuse Wine Bar is I saw the videotape. I do remember a hit into the eye, but I don’t remember what it is. The scar on my head is a fall. But did I fall from getting hit in the eye? I’ve tried and tried and can’t remember.”

Allenby returns to golf next week in Los Angeles at the Northern Trust Open. During his last two tournaments in Phoenix and San Diego – he missed the cut in both – he said he ate dinner in the hotel or ordered room service.