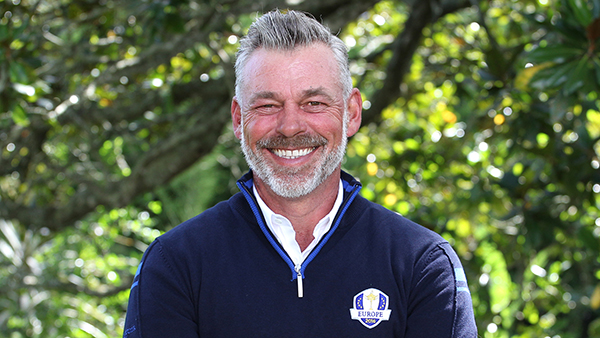 Darren Clarke provided arguably the most emotional story line in the history of the Ryder Cup, and helped forge one of the competition’s most successful partnerships.

And to mark the start of the next chapter in the charismatic, cigar-chomping Northern Irishman’s Ryder Cup story, he was picked as captain of the European team for the 2016 event at Hazeltine.

Overwhelming player support and healthy respect for him on both sides of the Atlantic made Clarke a unanimous choice on Wednesday.

“I have big shoes to fill,” said Clarke, the British Open champion in 2011 and one of the most popular figures in golf.

Clarke played for Europe in five straight Ryder Cups from 1997-2006, winning four times. The last of these came at The K Club, where he helped the team to a record-equaling 18 1/2-9 1/2 victory over the United States just six weeks after his first wife, Heather, died following a long battle with breast cancer. Playing through grief, he won all three of his matches.

Clarke was a non-playing vice captain under Montgomerie in 2010 and Olazabal in ’12, which groomed him for the top job.

“The Ryder Cup has been a massive part of my life and my career, so to have the chance to lead Europe next year is a huge honor,” said the silver-haired Clarke, the first Northern Irishman to be given the captaincy.

Miguel Angel Jimenez of Spain and Thomas Bjorn of Denmark were also candidates for the role but Clarke was always the big favorite and ended up being the unanimous choice, Montgomerie said.

“I think he’ll be a very good communicator, which is most important as a captain,” Montgomerie said. “He has the respect of the players – that’s a given as Open champion – and his record in the Ryder Cup is very good.”

Clarke has won 11 1/2 points for Europe, with six points from eight matches alongside Lee Westwood putting them joint-second in the all-time list of most successful Ryder Cup combinations.

Top-ranked Rory McIlroy and recent stalwarts of the European team like Ian Poulter, Justin Rose and Graeme McDowell had given their backing to Clarke.

“That, to a large extent, crystallized my view on where the captaincy should go,” McGinley said. “It’s quite clear Darren got a lot of support.”

Clarke said he would be “foolish” not to follow the same formula as McGinley, who created a great camaraderie in the European team as it swept to a 16 1/2-11 1/2 victory at Gleneagles in September.

While the Americans created a task force in the wake of a sixth loss in the last seven editions of the Ryder Cup, all Europe had to do was put someone in place to take forward the template of success. Clarke is unlikely to be revolutionary in his approach to Hazeltine.

“With the team bonding and team spirit in Gleneagles, it’s something I’ll want to replicate,” Clarke said.

Clarke is popular in the United States and seems suited to be Europe’s captain for a Ryder Cup on American soil. Aside from winning the Open, the biggest victory of his career came in the U.S. when he beat Tiger Woods in the final of the WGC-Matchplay Championship in 2000.

The Associated Press reported Monday that Davis Love III would be the captain of the U.S. team, and is to be introduced on Tuesday. Love and Clarke are close friends.

“That would be wonderful,” Clarke said of coming up against Love. “He’s a gentleman and there isn’t a nicer man in our sport.”

Clarke said he will likely go for five vice-captains, as McGinley did. McGinley, though, said he would not accept the role if asked.