Potter writes his own amazing script at Pebble Beach 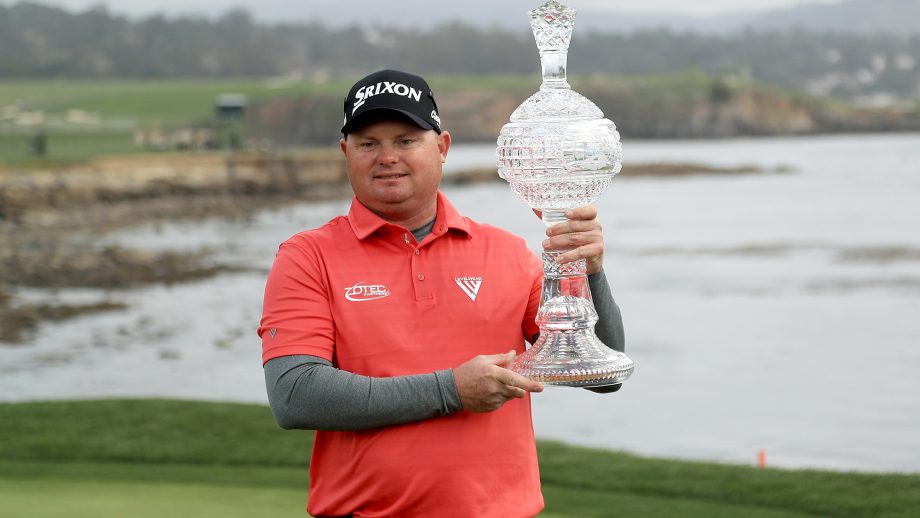 PEBBLE BEACH, Calif. – Ted Potter Jr. beat three of the biggest names on the PGA Tour at one of the most famous golf courses in America, and then his day got even better.

Walking out to the 18th green for the trophy presentation at the AT&T Pebble Beach Pro-Am, he stopped to chat with Clint Eastwood.

“It was pretty awesome to meet him out there today,” Potter said. “Big fan of a lot of his movies he’s done, and it was just incredible to meet him, too.”

In some respects, Potter starred in his own show with an ending not many imagined.

He turned pro out of high school and groomed his game on the mini-tours, sometimes earning barely enough money to pay for a week’s worth of food and gas. When he first got onto the Web.com Tour, he missed the cut in all 24 tournaments he played. Two years after he broke through on the PGA Tour by winning the Greenbrier Classic, he broke his right ankle stepping off a curb and sat out for two years.

The injury was so severe he had two surgeries – one to insert two plates and 12 screws, the other to remove all that hardware.

He played in the final group Sunday with Dustin Johnson, coming up on a full year at No. 1 in the world. Potter was No. 246.

Potter overcame a three-putt bogey on the opening hole by not dropping a shot the rest of the way. He closed with a 3-under 69 and left the mistakes to everyone else, a cast of challengers that included Johnson, Phil Mickelson and Jason Day. They all finished second, along with Chez Reavie.

Hollywood stuff, for sure.

“I’m so happy right now to get it done today, especially against the world No. 1, playing with him today,” Potter said. “The win here at Pebble is just unbelievable.”

There is nothing fancy about Potter’s game or how he won for the second time in his career.

He birdied both the par 5s on the front. He chipped in for birdie behind the seventh green, which gave him a two-shot lead. And then he was never out of position the rest of the way, knowing he had the lead and that someone would have to catch him.

Mickelson made a late charge with three birdies in a four-hole stretch through the 17th hole. But trying to make eagle on the 18th for a chance at winning, Lefty came up just right of the green and into a bunker, leading to par and a 67.

It was his best finish since that duel at Royal Troon with Henrik Stenson in the British Open in 2016. Mickelson, who tied for fifth in Phoenix last week, had consecutive top 5s for the first time since the summer of 2013, his last victory.

“I made a few good birdies coming down the stretch there to feel the nerves again,” Mickelson said. “Unfortunately, it’s not enough, but it was a great week, a lot of fun, perfect weather and really had a great time.”

Day also made a late run with two birdies on the 15th and 16th, but then his tee shot on the par-3 17th went to the right and the pin was all the way to the left. He made par, then hit onto the beach with a driver off the deck on the 18th. Day kept it entertaining by playing off the beach, over the sea wall and over the green. He still managed to get up-and-down from a bunker for par and a 70.

Johnson was never really in it after his bogey on No. 8 to fall three shots behind. He kept missing in the wrong spots, and he dropped two more shots when he couldn’t afford to drop any. He closed with a 72.

“A few iron shots cost me a few bogeys,” said Johnson, who played Pebble in 70-72 on the weekend. “Two under in 36 holes is not too good as well as I thought I was playing. I’d like to have put a little more pressure on Ted.”

Potter was the last man standing, remarkable considering it was only two years ago when he couldn’t stand at all.

He slipped off a curb at the Canadian Open in 2014 and broke his ankle. Through the surgeries, he wasn’t sure if he would ever be able to play again, or at least play the way he once did.

“It’s been a struggle,” he said. “You break your ankle and you don’t know what’s going to happen with your swing, with your career. It’s unbelievable right now. … This has been a blast this week.”

The ultimate underdog? Potter wasn’t sure about that. He had an opportunity and grabbed it.

“It’s golf,” he said. “All you can do is try as hard as you can. Just keeping grinding. I don’t know what to say.”