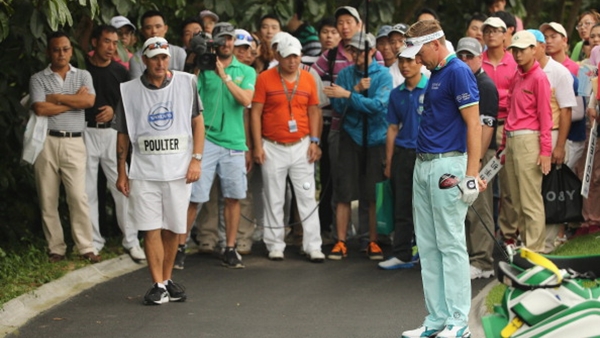 During the second round of Volvo China Open, Ian Poulter incurred a two-stroke penalty for dropping a ball incorrectly under Rule 24-2 after taking relief from a cart path.

He originally hit his ball into some dense foliage on the par-13th and proceeded under Rule 28c, dropping within two-club lengths of where his ball lay.  After that drop, his ball came to rest on the cart path and Poulter decided to take relief for that situation as well.  However, he dropped the ball two club-lengths from his nearest point of relief and played that ball, which resulted in the two-stroke penalty.

If a player elects to take relief from an immovable obstruction, the player must lift the ball and drop it, without penalty, within one club-length of and not nearer the hole than the nearest point of relief.

Had Poulter realized his error before playing his shot after taking relief from the cart path, he would have been able to correct his error under Rule 20-6.

After the round, Poulter said “We make mistakes, I guess, and that was a fun one.  Guess I need to get the rules book back out and start chewing it.”

The silver lining is that Poulter still made the cut after incurring this penalty and provided some humour for his for 1.6 million Twitter followers.

I’m such a ¥#%$¥+€ helmet, the most simple Rule that I had been given the day before, Drop in second club length. Errr wrong 2 shot penalty.

I didn’t think it would be difficult to drop a golf ball, but today I managed to make a complete $€$%^#¥= arse of it. Basic Rules. #Nobhead

Golf Digest has a great article showing cartoons submitted on Twitter. You can check them out here.