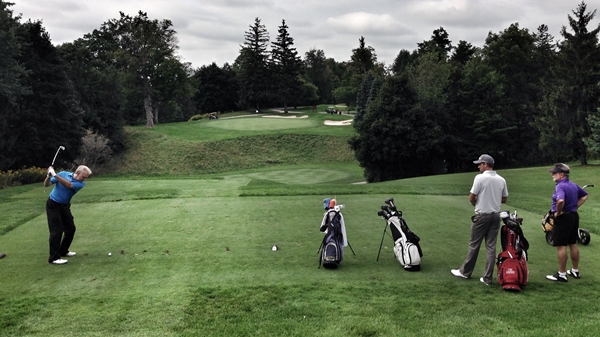 Earlier this week I had the chance to play in PGA TOUR Canada’s TOUR Championship of Canada Pro-Am at Sunningdale Golf Club in London, Ont.

It’d been quite a while since I’ve been a part of any sort of pro-am environment (four years to be exact) and being on the other side of the spectrum for so long, either caddying or playing as a professional, I took for granted how neat the experience is for an amateur golfer.

Now, I’m a little biased, but I really had a great group to play in. Paired alongside SCOREGolf’s equipment expert Rick Young and CTV London’s Peter Uzzi we had a late switch out for our pro and lucked out by getting paired with Canada’s Cory Renfrew of Victoria, B.C.

Cory’s a past champion on PGA Tour Canada and for never meeting the majority of our group before, he fit in with our rapid-fire question filled media group right from the start, easily answering Young’s confusing lie-loft angle questions like a true pro.

After being introduced by Golf Canada’s pro-am starter Len Obokata’s booming voice off the first tee at Sunningdale our group was off to Renfrew’s drive in the left rough, 65 yards in front of everyone else, which was a common trend the entire day.

What I find the most fun about the pro-am experience and golf in general is that you can show up to any tee anywhere and make new friends with complete strangers over the course of a round.

The amount of connections and contacts I’ve made over my short 27-year lifespan playing golf is astounding and Tuesday’s experience only added to my list. Being paired alongside any pro like Cory, a stranger and now new friend (Peter) and an industry mentor (Rick) certainly made for a memorable day.

There is such a fine line between what defines a guy like Cory Renfrew from being on the PGA Tour tomorrow. Each of the 60 players teeing it up at Sunningdale this week could be on tour with one lucky break, a hot-streak or maybe even a little more funding. All of these guys can play and you can hear it when they hit the ball.

The sound that comes off a great players clubface is very unique. The amount of times Peter marveled at the noise that echoed off Renfrew’s Titleist driver made me smile – he was simply astounded at how effortless and easy every ball flew off that clubface.

On top of watching these guys effortlessly navigate their ball around the course, what’s maybe the most fun is getting the chance to interact with any of them as they’re on their way up.

As I mentioned earlier, there’s a fine line separating the 60 players at Sunningdale from the big leagues. It’s pretty cool to imagine that if Renfrew wins this week our group got to play with the guy that earned his full-time Web.com Tour card and will likely make an appearance on the PGA Tour someday soon.

At the end of the day our group ended up at the top of the leaderboard after a smooth 53 thanks to Peter sinking two birdie putts on par-3s for net hole-in-one’s. We all shared a lot of laughs that morning, plenty of fist bumps and I’m sure all of us will remember the experience for many years to come… especially when Cory gets his next win.