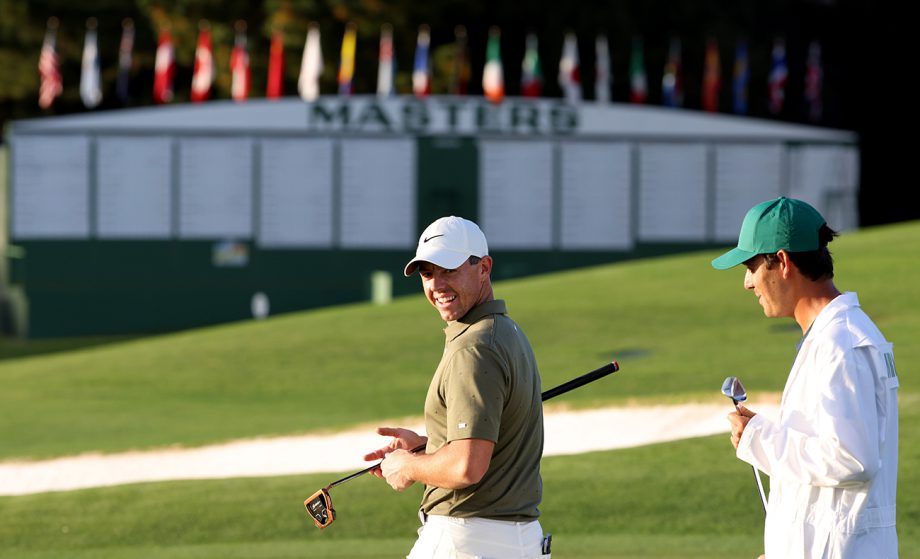 AUGUSTA, Ga. – Phil Mickelson was either speaking from experience or ignoring a big part of his history.

The topic was Rory McIlroy and his quest for the career Grand Slam, the most exclusive club in golf. McIlroy only needs to win the Masters to make it a clean sweep of the majors.

Mickelson is not part of that club, either, lacking only the U.S. Open but not effort. He holds the record with his six runner-up finishes. And so he was asked Tuesday if he had any advice for McIlroy as he embarked on his sixth attempt to complete the Grand Slam at Augusta National.

“First of all, there’s not much advice I can give him,” Mickelson said. “The guy is as complete a player as there comes.”

Lefty liked what he saw Tuesday. They played a nine-hole match Tuesday, the San Diego squad of Mickelson and Xander Schauffele losing to McIlroy and Dustin Johnson.

It did in 2004 at age 33 at the Masters. And then Mickelson won a major each of the next two years, followed by another Masters, and then a mild surprise at Muirfield with one of the greatest closing rounds to win the British Open.

“He has so many majors already and such a strong game that winning a Masters will happen,” Mickelson continued. “And when it does, I think he’s going to win a few.”

If only it were that simple.

Greg Norman surely felt he would win the Masters and perhaps a few more when he threw away his first good chance in 1986 with a bogey on the final hole. The Shark never won a green jacket. Neither did Ken Venturi, Tom Kite, Johnny Miller, Tom Weiskopf, Ernie Els, David Duval. It’s a long list.

McIlroy can appreciate Mickelson’s belief as it relates to the Masters. But this is about more than the Masters. It’s the final link to the career Grand Slam, achieved only by Gene Sarazen, Ben Hogan, Gary Player, Jack Nicklaus and Tiger Woods.

“Nothing is given in this game,” McIlroy said.

Mickelson didn’t seriously contend on the final day of any major until the 1999 U.S. Open. And those six silver medals came before he got the third leg of the Grand Slam. He won the British Open when he was 43.

McIlroy is 31. He captured the third leg at British Open when he was 25, his entire career ahead of him. And it still is. There is no reason to believe he can’t be fitted for a green jacket in November or April, or even a few years down the line.

Sarazen is the only player to complete the Grand Slam at the Masters, in 1935, and that requires an asterisk because the Squire didn’t even know what he had achieved. The modern Grand Slam wasn’t part of the conversation until Arnold Palmer started it in 1960.

What adds to the burden of completing it at Augusta National are memories – scar tissue, in most cases – from returning to the same course to face the same demons.

McIlroy had a four-shot lead going into the final round in 2011 and coughed it up with an 80. That was before he had won a major. His next real chance was two years ago, when a birdie on the final hole of the third round left him three shots behind but in the final group with Patrick Reed.

All eyes were on McIlroy. All cheers were for McIlroy. He shot 74 and finished six back.

“I’ve always felt like I had the game to do well around here,” McIlroy said. “It’s just a matter of getting out of my own way and letting it happen. But as I said, you have to go out and earn it. You can’t just rely on people saying that you’re going to win one. Greg Norman never did. Ernie Els never did. There are a lot of great people that have played this game that have never won a green jacket.

“It’s not a foregone conclusion, and I know that.”

Even so, there was a quiet confidence about McIlroy, fitting for what will be a quiet course. He fixed a few flaws, which has given him more freedom and trust in his full swing. He likes not being a hot topic of conversation at the Masters.

One reason his bid for the Grand Slam is getting so little attention is because there’s so much more to talk about – the Masters in November, devoid of spectators and roars. And his recent form doesn’t help.

Before the COVID-19 pandemic shut down golf for three months, McIlroy had a chance to win every week – seven straight tournaments finishing no worse than fifth. Since the return, he has not contended in any of the 12 events he has played.

He has suffered from the lack of energy from not having spectators, though it’s been the same for other stars. It’s time to move on, and McIlroy realizes the adjustment period should be over by now.