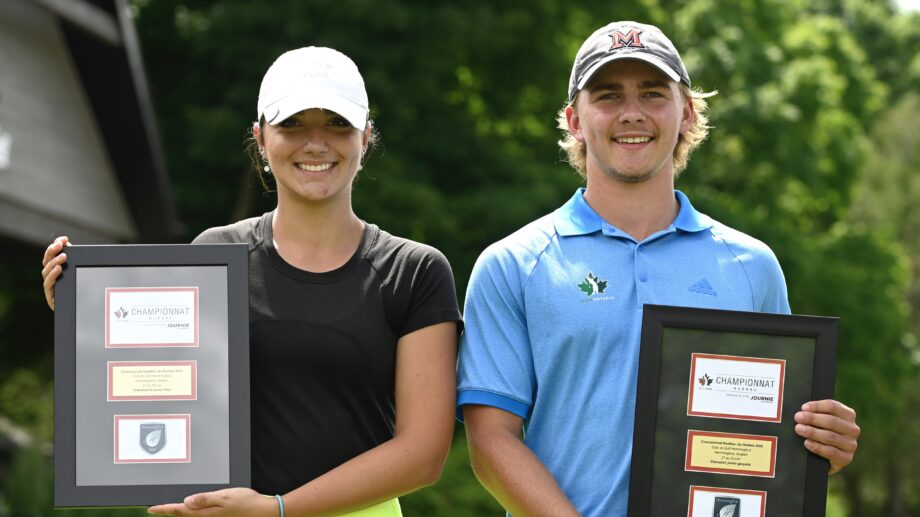 HEMMINGFORD, Que. – Cameron Pero wasn’t driving four hours from his hometown of Bloomfield, Ont., to Hemmingford, Que., for any other reason but to win the NextGen Quebec Championship. And that he did.

The Team Ontario member had already secured his spot at the Canadian Junior Boys Championships later this summer with a T2 finish at the NextGen Ontario Championship and took his game one step further this week in Quebec, finishing atop the leaderboard.

Pero joined Yasmine Qureshi – champion of the Junior Girls division – in the winner’s circle at Club de Golf Hemmingford on Thursday afternoon after each mounting comebacks of their own in the final round of the regional junior event south of Montreal.

Matthew Javier took a 36-hole two-stroke lead into day three of the 54-hole tournament, but the advantage was short lived when the final pairing set sail on Thursday. Momentum swung in Pero’s favour in the early stages of the round and after just four holes, he held the outright lead.

Javier, who earned a runner-up finish at the NextGen Prairie Championship earlier in June, got back on level terms with his counterpart with a birdie on no. 5 but that was as close as the Toronto, Ont. native would get. Pero regained full control of the lead with a birdie on no. 6 and after bogeys on no. 9 and no. 11, the Miami University commit steadied the ship en route to a final round one-under par 71.

The Picton Golf & Country Club member’s win in Quebec is his second career NextGen title after taking home the honours at the NextGen Fall Series East Championship in 2021.

Qureshi fired the low round of the week, a four-under 68 in the second round of the competition but still needed every one of her seven birdies on Wednesday to earn victory. The Ville de Québec native dug herself a deep hole with an opening round 10-over par 82, but climbed her way back to the surface in round two, and then leaped onto the podium with a final round 76 to win by one stroke over Shauna Liu (Maple, Ont.)

Qureshi, out of Club de golf de Lorette, trailed Keira Hou (Richmond Hill, Ont.) by three strokes when making the turn on Thursday but finished strong with an even-par 36 coming in, to capture the title. Hou, who lead or co-lead throughout the entire tournament, dropped four strokes on her final three holes and fell into third place.

Hou’s younger sister Katherine was also in the field in Hemmingford and posted a T7 finish to book her ticket to the Canadian Junior Girls Championship later this summer, alongside her sister Keira.

Click here for full results of the 2022 NextGen Quebec Championship.

Including Qureshi, the top eight players (including ties) in the Junior Girls division have earned exemptions into the 2022 Canadian Junior Girls Championship taking place July 25-29 at The Marshes Golf Club in Ottawa, Ont.