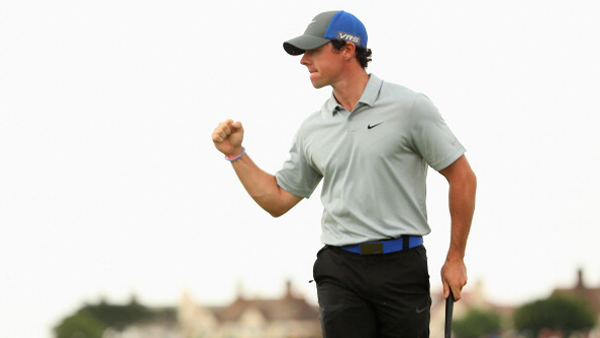 HOYLAKE, England – If organizers of the British Open needed any vindication of their historic decision to use a two-tee start at Royal Liverpool on Saturday, it came from Rory McIlroy about 30 minutes after his round.

Torrential rain was pounding the roof of the media tent as McIlroy was holding a news conference, discussing his third-round 68 that inched him closer to a first claret jug.

Asked if The R&A made the correct decision to go off two tees and send the whole field out early, the tournament leader looked up and pointed to the skies.

“It was a great decision,” McIlroy said. “They got it right.”

In a move that riled traditionalists, The R&A looked at the forecast of thunderstorms and heavy rain and decided late Friday to make an unprecedented schedule change. Half of the field was to begin on the 10th hole and all 72 remaining players were to set out within two hours of each other.

Sure enough, the heavy rain arrived – 30 minutes after McIlroy rolled in his eagle 3 at No. 18 to secure a six-shot lead with the last action of the day.

Players finishing their third rounds were generally accepting of the two-tee start.

“We’ve never done it before at the Open Championship,” said 2011 champion Darren Clarke, who was disbelieving when he was told over dinner on Friday. “It’s one of the beauties – you get good tee times, you get bad tee times.

“But they had to do it today, and it looks like they’ve made the perfect call.”

There had been only intermittent outbreaks of rain and barely any wind at Hoylake by the time McIlroy wrapped up the third round shortly before 4 p.m. local time (11 a.m. EDT).

McIlroy’s group finished about three hours earlier than usual on a Saturday at the British Open.

There was thunder and flashes of lightning in parts of the northwest of England overnight, and the forecast of more of the same across the area on Saturday led The R&A to act. A two-tee start had never been done in the tournament’s 154-year history.

Spectators arrived with their rain gear and umbrellas. A sign at the back of the ninth green read: “Be prepared, thunderstorm possible.”

In fact, the main gripe among players and fans was that they were not given enough time to prepare. One spectator was heard complaining that the decision was made too late, because it disrupted his travel plans.

“There’s a lot of surprise (among players) that no one could get their tee time until 10:30 last night,” 2013 U.S. Open champion Justin Rose said. “That’s very tough when you’re trying to prepare for the tournament.”

Swedish player Henrik Stenson said he had gone to bed not knowing his tee time.

“My caddie woke up in the middle of the night and checked it,” Stenson said.

The split tee times also meant that the duties of Ivor Robson, the official starter for the British Open since 1975, were halved. Players getting underway on the 10th were introduced to the crowds by European Tour official Mike Stewart.