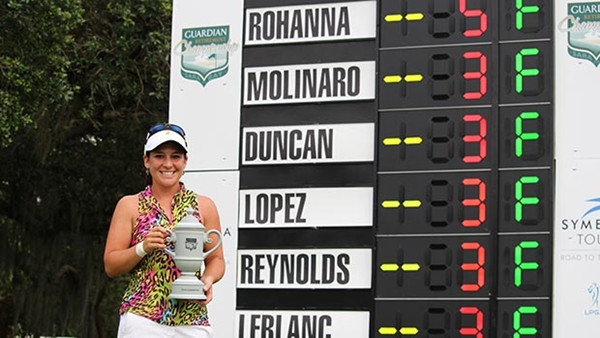 Rohanna finished with a 2-over 74 in windy conditions for a 5-under 211 total at difficult Sara Bay.

“I can’t even feel anything right now. It has been an amazing week,” Rohanna said. “I’m so excited and so happy to have my first win down in Sarasota. I’m just happy with the way I played and I am ready to take on the next one.”

“I’ve got my eye on a new heifer so I might be getting a new cow soon,” Rohanna said.

Rohanna, from Waynesburg, Pennsylvania, opened with a 71 and had a 66 on Saturday to take a two-stroke lead into the final round.

“When the last putt went in everything drained from my body,” Rohanna said. “I think I’ll be able to take this experience into other tournaments. I remember getting some of my first junior wins and amateur wins and those gave me so much confidence and now to finally say I have a professional win is just awesome.”