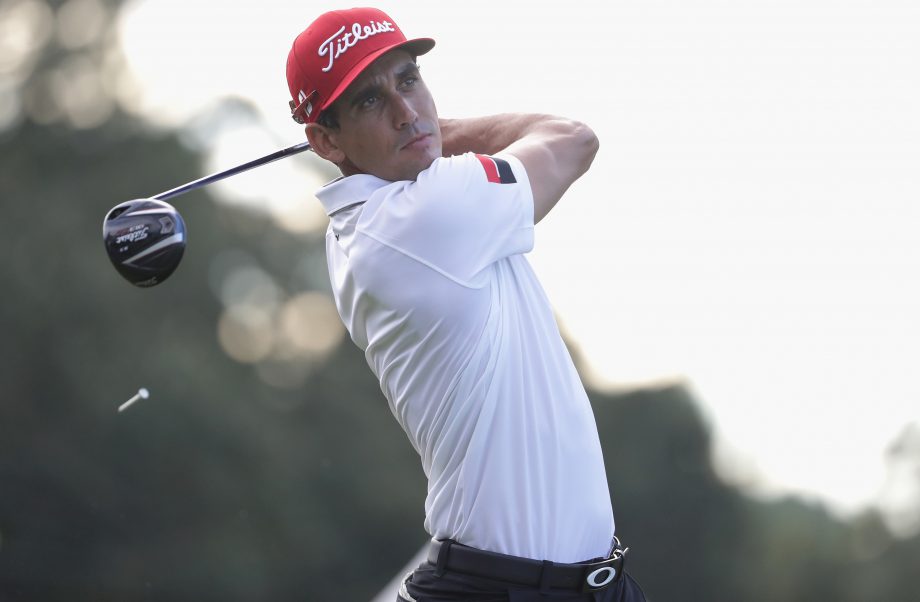 GREENSBORO, N.C. – Rested after the Rio Olympics, Rafa Cabrera Bello shot a 7-under 63 on Thursday in the Wyndham Championship for a share of the first-round lead with Kevin Na.

Cabrera Bello eagled the par-5 fifth and closed the bogey-free round with a birdie on Sedgefield’s par-4 ninth. On Sunday, the 32-year-old Spaniard tied for fifth in Rio.

“Last week was a big adrenaline week,” Cabrera Bello said. “It was the first time I was really not playing for myself, just playing for my country and obviously it’s a huge honor, but also big responsibility. I wanted to do good and I was pleased with my result. … Coming into this week, I felt the game was good, just needed a bit of rest.”

The four-time European Tour winner is trying to stay in position for a Ryder Cup spot, with more ranking points available in North Carolina than the European event in the Czech Republic. The shorter travel also played a role in his decision to play the tournament.

“There was a chance of me not making it through the money list and making it through the world ranking points list, that’s what I wanted to focus on,” Cabrera Bello said. “I’m pretty sure this week has a stronger world ranking than the one in Europe and I also felt that it was going to be easier to travel south to north than from Rio to Czech Republic, jet lag-wise.”

Na had seven birdies in his bogey-free round in the PGA Tour’s final regular-season event. The American tied for eighth last week in the John Deere Classic. He won his lone tour title in 2011 in Las Vegas.

“Hit it well,” Na said. “Made a lot of putts. That putter has not been all that hot this year and it was nice to see a lot of putts go in. It’s usually over the years been my strong part of game but I felt like I really found something.”

“Had a perfect number, downhill a little bit, 159 (yards) and it was playing straight downwind and good 9-iron for me and looked good all the way,” Donald said. “Hit a foot short and went in the hole. Bonus when it goes in, obviously, and nice to win a holiday for life. Apparently that’s what I got for it.”

Snedeker, the 2007 winner at Forest Oaks, bogeyed the final hole. He’s fighting for a spot on the U.S. Ryder Cup team.

“I want to be on that team. I love playing Ryder Cups,” Snedeker said. “‘m going to use that as motivation to go out there and work hard and grind my tail off the next three days.”

Jim Furyk had a 66 in his first round since shooting the first 58 in PGA Tour history two weeks ago in the final round of the Travelers Championship.

“Right now, a touch frustrating,” Furyk said. “If I went back, I think I hit a bunch of greens. I might have hit every green. Two three-putts were the two bogeys. The greens are just really difficult. They’re very quick. There’s a ton of slope in them.”

“Just a special place to us and one of the places I need to come back and play,” said Reed, coming off a tie for 11th in Rio. “I’m off to a good start.”

U.S. Olympic teammate Rickie Fowler birdied his last two holes for a 67. He tied for 37th in Rio.

“We enjoyed being down there and the big thing coming from there up to here is not how much of a time change, there’s only an hour back,” Fowler said. “That makes things a lot easier.”

“It’s disappointing not to get to play,” said the U.S. Ryder Cup captain, a three-time champion in the event. “The surgery went well. Rehab is going even better.”

Robert Allenby had two double bogeys in a 74. The Australian was arrested outside a casino in Rock Island, Illinois, last week after missing the cut in the John Deere Classic. He was charged with disorderly conduct and criminal trespassing. In January 2015, Allenby was found with severe bruises several hours after visiting a restaurant with friends. Allenby, who had missed the cut in the Sony Open, claimed to have been abducted and beaten. A Hawaii man was sentenced to five years in prison for using Allenby’s credit cards and identification.