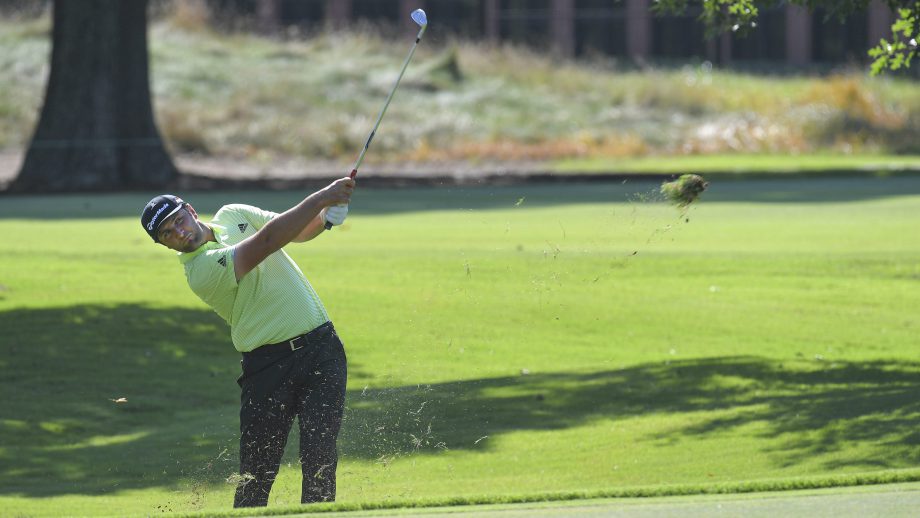 MEMPHIS, Tenn. – Travelling from Northern Ireland to Tennessee has left everyone who played four rounds at the British Open fighting jet lag.

Rahm matched the lowest round of his PGA Tour career with an 8-under 62 on Thursday at the FedEx St. Jude Invitational, taking advantage of nearly perfect greens to open a three-stroke lead in the World Golf Championships event.

“I was pretty exhausted Monday and Tuesday, and that’s why I decided not to do much on the golf course and just make sure mentally I was going to be ready to compete,” Rahm said.

He spent about an hour on the putting green Wednesday. He didn’t step foot on the front nine, his back nine, until he made the turn, and he had five birdies on that side.

Rahm rolled in five putts of at least 16 feet for birdies in the bogey-free opening round at TPC Southwind. The Spaniard finished with a 7-footer to save par. He also opened with 62s last year in his CareerBuilder Challenge victory and in January in the Farmers Insurance Open at Torrey Pines.

“That’s what made it so comforting because I knew, especially with the greens being this pure, if I started a ball online I was going to have a chance,” Rahm said.

Bubba Watson, Hideki Matsuyama, Patrick Cantlay, Cameron Smith and Shugo Imahira shot 65. Henrik Stenson and Ian Poulter were among six players at 66 on a day featuring near perfect conditions with temperatures in the mid-80s lacking the humidity Memphis usually melts through in late July.

Justin Thomas, the winner of the WGC event last year in its final time at Firestone in Ohio, had a 68. Dustin Johnson, the St. Jude Classic winner on this course last year, and Rory McIlroy, who missed the cut by a stroke last week in the British Open, each shot 69.

Johnson was 3 over at the turn, and the only man in the field to win on this course – with victories in 2012 and 2018 – switched up his putting grip while over the ball on No. 1. He moved his left hand below his right and worked his way back under par with birdies on five birdies and one bogey.

“It couldn’t get any worse, so I figured I had to try something …,” Johnson said. “I hit great shots, I was always in good positions. I should have shot 3 or 4 under on the front, I shoot 3 over. It was, yeah, not very good.”

Matsuyama was the first to 5 under after a 21-foot birdie putt on the par-3 11th with the island green. Then Matsuyama hit his tee shot on the par-4 12th left of the cart path and two-putted for bogey.

That’s when Rahm, a three-time winner at the age of 24, got going. Even though he had only played nine practice holes Wednesday, Rahm had very little trouble on the 7,237-yard course.

The Spaniard who played at Arizona State rolled in an 18-footer on the 18th, then made the turn with back-to-back putts of 18 feet for three consecutive birdies. He hit his tee shot on the par-4 sixth into the weeds left of the fairway and hit his second 110 yards to 2 feet to go to 6 under.

His putter came through again with a 16-footer on No. 7, then he got his eighth birdie of the round with a yet another long putt – just shy of 16 feet on the par-3 eight. He saved par with a 7-footer on his final hole.

“I tried to put a stress or a little emphasis on being rested, and it paid off today,” Rahm said. “Obviously, I have three more days to go and hopefully the battery lasts.”

This is the best round yet at a World Golf Championships event for Rahm, who won his third PGA Tour title earlier this year teaming with Ryan Palmer at the Zurich Classic in New Orleans. He also tied for third at the U.S. Open in June and tied for 11th last week at the British Open. Rahm tied for 17th in this event last year in Ohio.

Divots: Jordan Spieth was a stroke off the lead at 4 under through 11, and he finished with birdies on two of his final three holes. But he also had a pair of triple bogeys after hitting tee shots into the water on the 12th and 15th. He finished with a 70.