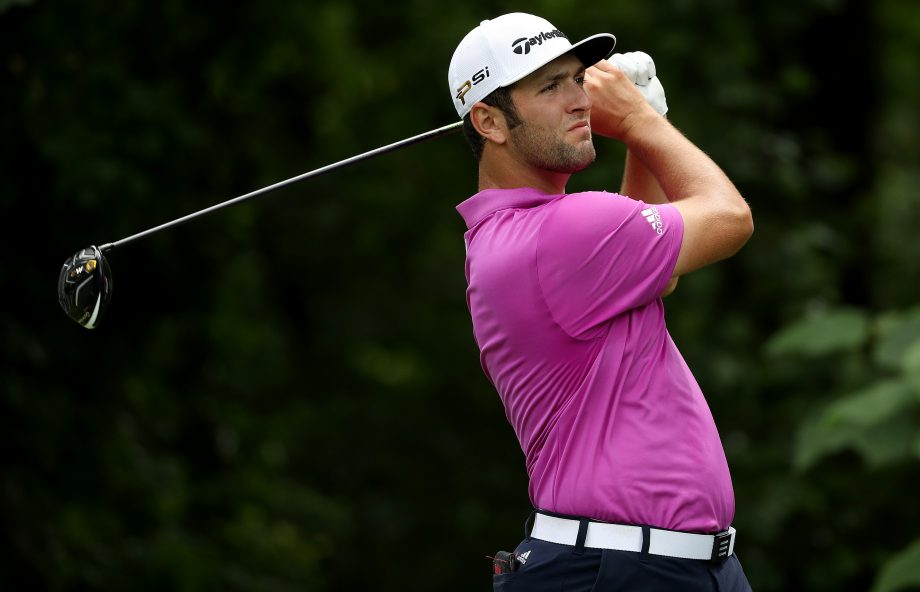 BETHESDA, Md. – Jon Rahm couldn’t remember a single shot he took in a professional debut to remember. Ernie Els recalled shots he hit on the same course 19 years ago.

Rahm shot a 7-under 64 on Thursday at Congressional to take the first-round lead in the Quicken Loans National, Tiger Woods’ annual tournament that started two hours late because of rain.

The soft course, with a fox lounging on the edge of a bunker and darting around with little care for the golf going on around him, allowed players to attack fairways and play aggressively. Rahm took advantage of that with seven birdies in a bogey-free round.

“I was anticipating this moment,” the 21-year-old Spaniard said. “I’m working on it a long time that I kind of blacked out a little bit. I don’t remember a single swing I made all day or any putting stroke or anything. I just remember the ball flying or rolling.”

The former Arizona State star was the only amateur to make the cut last week in the U.S. Open, tying for 23rd at Oakmont. With momentum from the U.S. Open, Rahm tried to temper his expectations and relied on advice from golf great Jack Nicklaus.

“What he told me is to just never do more than what I can do,” said Rahm, who cited not looking at social media as another key to his success. “Try not to risk too much. And that’s certainly something I did today.”

The long-hitting Rahm had a one-stroke lead over Jhonattan Vegas and a two-stroke advantage over a pack that included Els, who won the 1997 U.S. Open at Congressional. Rickie Fowler and Vijay Singh were among those at 68.

Els, who turned pro five years before Rahm was born, chose to play the Quicken Loans immediately after missing the cut at the U.S. Open because of how much he likes the course. He has the same caddie, Ricci Roberts, who was on his bag back in 1997, and Thursday was full of useful memories.

“Winning a major at a special place like Congressional, playing here again, you just keep thinking back on shots,” Els said. “Almost every single hole there’s a moment back in ’97 where we can remember still.”

The 46-year-old Els is almost four years from his last victory, when he won the 2012 British Open. But he started feeling more like himself during the pro-am Wednesday and showed it by shooting a 66.

“I felt comfortable with my swing this week,” Els said. “I’ve had a very tough year. I haven’t played very well, so I need to start playing well.”

Rahm, on the other hand, has been gradually improving. He opened eyes by tying for fifth at the Waste Management Phoenix Open in February 2015 and turned pro as the top-ranked amateur.

Now his challenge is to keep expectations low while leading a tournament. Rahm’s plan was to go see a movie and get away from golf rather than focus on it.

“It is a challenge,” Rahm said. “I’ve been playing a lot of golf lately and maybe trying to get time off golf is just as important as time practicing, so maybe just resting my mind a little bit would be the best way to do it.”

The 7,569-yard course, which last hosted the U.S. Open in 2011 when Rory McIlroy won it by eight strokes, could play even longer once it dries out by the weekend. After rain that started before dawn, players said the fairways weren’t bouncing, so clean shots could get the job done.