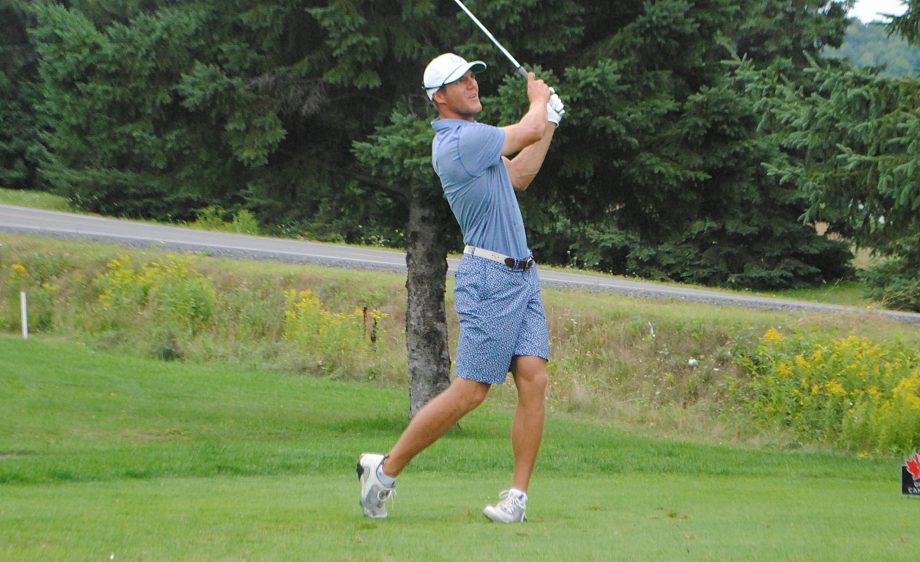 BROMONT, Que. – Winds gave way to a light drizzle at Golf Château-Bromont as defending champion Garrett Rank shot a third-round 7-under 65 to claim a share of the 2016 Canadian Men’s Mid-Amateur lead alongside Jordan Irwin.

Rank of Elmira, Ont., began his climb from fourth place following a consecutive trio of birdies on holes 2 to 4 to make the turn at 3-under.

“I played really well today. My putter was hot really early,” said Rank. “I missed three chances on 6, 7, and 8 which cooled the round down, but I finished with an eagle and a birdie, so that was fun.”

The 28-year-old collected birdies on holes 11 and 13, but lost the lead with a bogey on No 15. An eagle on the par-5 17th followed by a birdie on No. 18 pushed Rank into a share of the lead at 14-under 202. The University of Waterloo alumnus won this event back-to-back in 2014 and 2015, and is determined to earn his third-straight exemption into the RBC Canadian Open.

“I’m going to be really aggressive again tomorrow. For me in this event, I’m either first or I’m last. You get the [RBC] Canadian Open exemption if you win, so finishing second or sixth, it doesn’t matter. Tomorrow, I’ll be playing for first place.”

Coming off a commanding second-round 7-under performance, Irwin faltered early with bogeys on holes 2 and 8. The 36-hole leader from Banff, Alta., carded four birdies through the back nine to finish the day 2-under.

A six-birdie day propelled Mattoon, Ill., native Derek Meinhart into sole possession of third, while Nashville’s Joseph Deraney registered a bogey-free 66 to follow in fourth at 9-under alongside Woodbridge, Ont., native Dave Bunker.

In addition to his three Canadian Men’s Mid-Amateur titles, Bunker was also crowned the 2015 Mid-Master champion at Abercrombie Country Club in New Glasgow, N.S. The 51-year-old currently leads the 40-and-over division by one stroke.

Matthew Sim (Oakville), Ryan Kings (Kitchener) and Charles Fitzsimmons (London) combined to finish 15-under 273 in the inter-provincial team competition – contested over the first 36-holes – to claim a second consecutive victory for Ontario.

The 2016 Canadian Men’s Mid-Amateur champion will receive an exemption into the 2017 RBC Canadian Open hosted by Glen Abbey Golf Club in Oakville, Ont., from July 24 to 30.

The final round of competition will see the first groups tee off from holes 1 and 10 at 7:30 a.m.