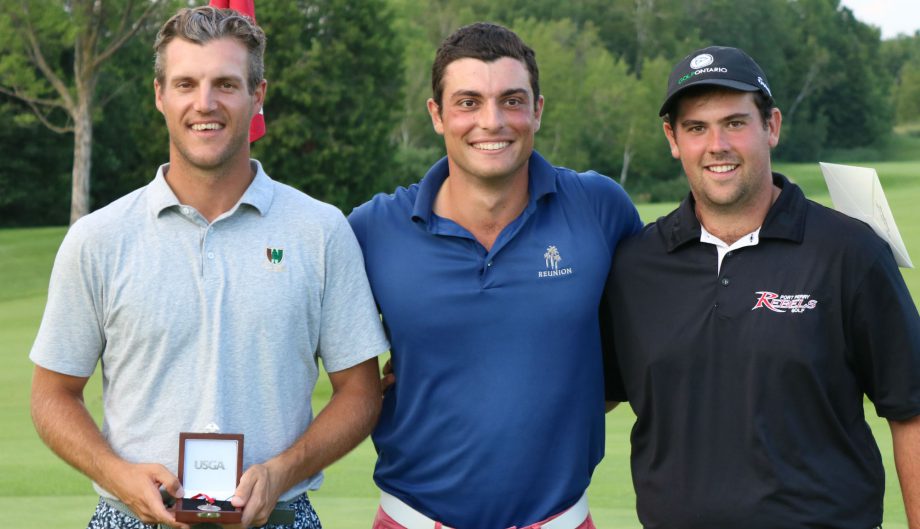 Rank captured medallist honours after he carded a course-record, 9-under-par 63 during his second round of the day, moving him to 10 under for the tournament. The 29-year-old from Elmira, Ont., went bogey-free with nine birdies during his record-setting round.

“Any time you set a course record it’s really neat,” he said, after his medallist victory. “But more so it means that the golf was really fun. It was just fun being out there, making lots of birdies, hitting a lot of quality shots and seeing the ball roll in the hole is always fun.

“These are the days where you have to sit back for 15, 20 minutes or maybe even an hour and actually soak it in and really enjoy it because these days are few and far between.”

Rank, like the rest of the field of 72, played 36 holes in the qualifying event. During his first round, he stumbled on the final six holes of the back nine and notched three bogeys and a triple bogey – his only bogeys recorded during the entire competition.

“It was just bad course strategy,” he said, of the stretch of six holes. “I was just a little too aggressive at certain parts trying to make birdies, but in the second round I just tried to make pars during those holes and it worked out.”

Foster, a 24-year-old from Concord, Ont., finished five strokes behind Rank after he scored a 1-under-par 71 followed by a 68, both of which were highlighted by strong finishes. Heading down the final stretch, Foster, who started his final round from the tenth tee, made birdies on holes 5, 8 and 9 to secure him his second-place qualifying position.

McNulty sat back in the standings as he started his second round in the afternoon. A triple bogey on 16th hole of his opening round lead to a 1-under par 73. But, in his second round he carded just one bogey while his six birdies resulted in a 5-under-par 67 to squeeze him into the final qualifying spot by one stroke, ending the tournament at 4 under.

Matthew Ion Young and David French both earned alternate status after they finished 3 under in the qualifier. Ion Young defeated French in a one-hole playoff and will be the first alternate.

The U.S. Amateur Championship will take place at Riviera Country Club in Pacific Palisades, Calif., on Aug. 14-20. The tournament consists of 36 holes of stroke play before the top 64 move on to match play.