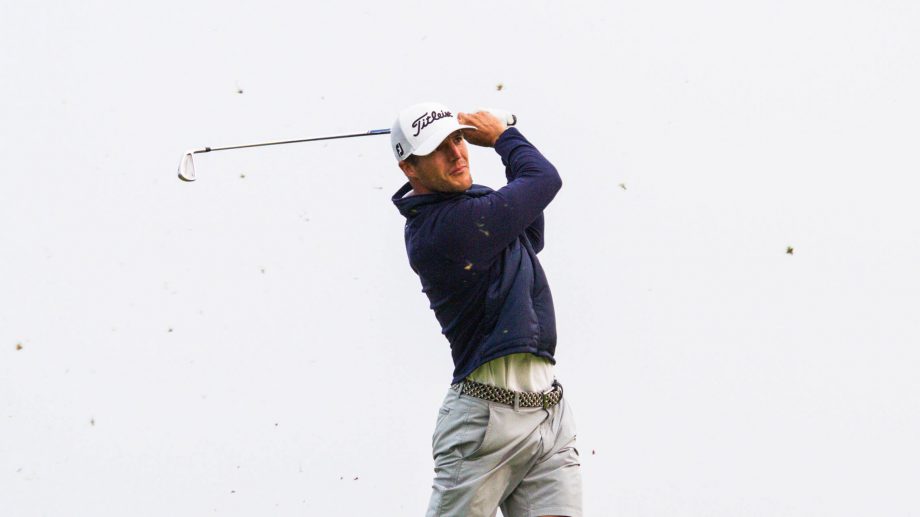 The three-time Canadian Men’s Mid-Amateur Champion started off strong with three birdies and an impressive eagle across his first twelve holes against a single bogey. However, the strength of the wind picked up, making for difficult playing conditions on the back-nine.

The less-than-ideal weather saw the 30-year-old make two more bogeys for a second round 68. With more wind forecasted for Thursday, the Elmira, Ont., talent will head into the third round with a three-stroke lead.

“I’m in a good condition after the first two days,” added the NHL referee. “Now everyone has to play in the same weather conditions, so it levels the playing field a little bit and I’m in a good spot.”

It was a different story for the three local golfers who round out the top-three. With the Victoria crowds cheering them on during the earlier wave, they are still within reach of winning the championship on home soil. As the familiar green of his home club lay under his feet, Victoria native Jordan Caron shot a 67 to sit in solo-second.

“I just wanted to come in with low expectations,” said the former host club Assistant Professional. “But it’s easy to get on your home golf course in a tournament like this and start thinking more about where not to hit instead of where to hit it, so I’ve been reigning myself in.”

Despite struggling with his swing, Caron registered four birdies and three bogeys enroute to a two-round score of 4 under par.

“I grinded well and kept my head and made a lot of par putts which is good and a few birdie putts here,” added Caron. “It was kind of fun to start getting to the part when I was under par again, so it’s exciting but at the same time you’re trying to treat it like a regular round of golf out here.”

Another Victoria Golf Club member, Saare Adams, started on the back-nine weighed down by four bogeys, but made three consecutive birdies after making the turn. The 34-year-old finished the round sharing a piece of third at 2 under with fellow Victorian Kevin Carrigan, who won the tournament in 2012 and 2013.

In the Mid-Master division, Todd Fanning from Winnipeg, Man., held on to first place, recovering from a shaky start that included two bogeys and two double bogeys.

“Today was a little more up and down than yesterday,” said the defending champion. “I had a lot of silly shots and a lot of good shots and turned out to be an even-par 70 which was a bit of a grind because I had to finish 3 under on my last seven.”

After recording the first ace of the tournament on the sixth hole, Sandy Harper of Nanaimo, B.C. is in second, three shots behind Fanning at 2 over. David Greenaway of Barrie, Ont., and host club member Craig Doell of Victoria, B.C., are tied for third at 4 over par.

Team Ontario cemented their spot in the tournament’s history, defending their inter-provincial title with an impressive 10-stroke margin to win the R. Bruce Forbes Trophy for the fourth straight year.  Thanks to Rank’s lead, three-time Mid-Amateur champion Dave Bunker of Brampton, Ont., and Patrick Forbes of Toronto, Team Ontario secured their 14th win in the inter-provincial division, the most wins by a team since the division was established in 1992.

Team British Columbia finished in second with a total 2-over-par 282 while Team Manitoba came in third at 9-over-par 289.