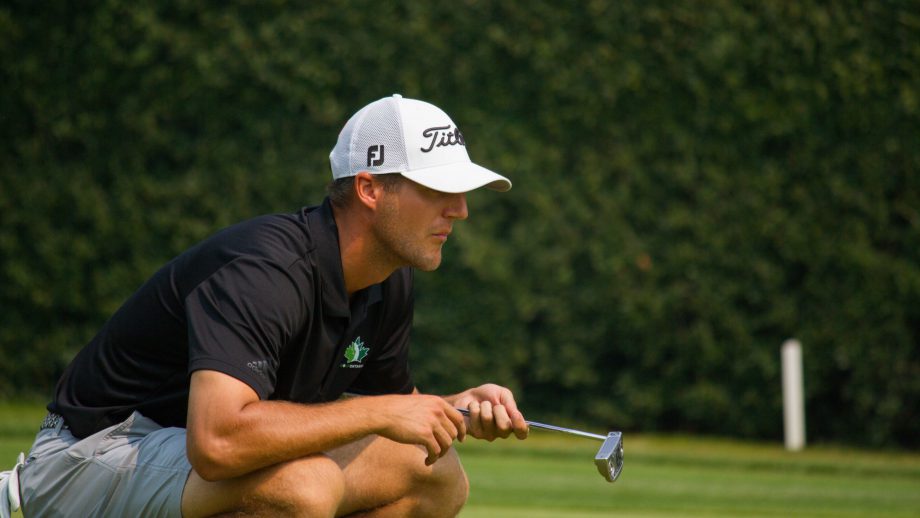 VICTORIA, B.C. – Garrett Rank heated up an otherwise calm, windless day at Victoria Golf Club after he shot a 5-under-par 65 to lead the Canadian Men’s Mid-Amateur Championship after round one on Tuesday.

The Elmira, Ont., talent started the day on the back nine and didn’t waste any time before recording an eagle straight out of the gate on his first hole.

“I got off to a great start, eagled the first hole, made a nice putt for birdie on my third hole and it was off to the races. I made a few mistakes in the middle of the round but had a lot of really good putting today,” said Rank, whose 2016 Men’s Mid-Amateur win made him one of only three players to record three consecutive titles in the tournament’s history. “65 is a great score and I’m pleased with it, but definitely going to need to be a bit sharper if I’m going to take it home.”

After his eagle, the 30-year-old Team Canada Amateur Squad graduate would go on to card five birdies against two bogeys to lead the field. He has made quite the splash in amateur golf this season, most recently at the 114th Canadian Men’s Amateur Championship where he finished in third and was the low Canadian at the tournament by seven strokes.

“I’m in love with the game of golf and love playing golf,” added the NHL referee, when asked about competing in his fourth event in a row and his intense amateur golf summer schedule. “If this is what I get to do in the summer, then I need to play in events.”

Todd Fanning, the defending Men’s Mid-Amateur and Mid-Master champion from Winnipeg, Man., leads the over-40 Mid-Master division by two strokes.

“We had the afternoon draw and neither of us threw grass or discussed the wind direction with our caddies one time,” said the 50-year-old. “Only getting one practice round on a course this difficult and with the greens this tricky, I felt like I was thinking pretty conservatively and was just kind of unsure of a few different shots. All-in-all, I think that a 69 is a good way to start.”

Defending champion Team Ontario leads the inter-provincial competition in large part due to Rank’s low-round of the day. Fellow teammates Dave Bunker (Brampton, Ont.) and Patrick Forbes (Toronto, Ont.) have Ontario at the top of the leaderboard by a comfortable four-stroke margin at 7 under par.

Team British Columbia is in solo second at 3 under while Team Quebec is in third at 3 over.