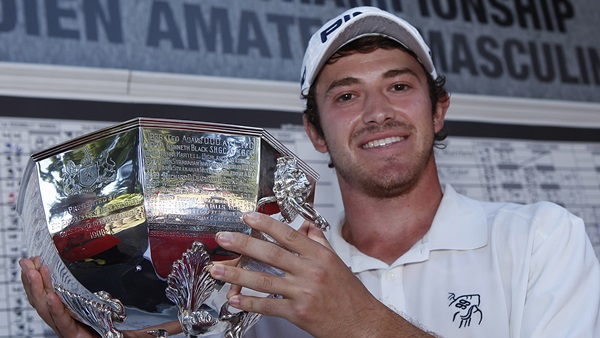 After another busy year, Golf Canada’s amateur championship season came to an end last month at the Canadian Men’s Mid-Amateur Championship. In all, 25 competitions were conducted from the beginning of May to mid-September.

In case you missed any events, here’s the low down on who took home Golf Canada hardware in 2013. Our reigning champions are:

The Canada Games were hosted in Sherbrooke, Québec with the golf portion held at Club de golf Milby. Thirty-six junior boys and thirty junior girls represented their provinces in an individual and team competition. British Columbia proved to be a dominating force as they were crowned the champion in the boy’s individual, girl’s individual, boy’s team, and girl’s team competition. The 2013 Champions:

In its eighth season, the Canadian Women’s Tour continues to be one of the world’s premier development tours for women attracting rising professionals and elite amateurs, both Canadian and internationals. Samantha Richdale was awarded as the Jocelyne Bourassa player of the year after winning the Tour’s Order of Merit and topping the money list. Richdale then went on to win the low Canadian honours at the CN Canadian Women’s Open. The 2013 Champions:

Samantha Richdale of Kelowna, BC

Jennifer Kirby of Paris, ON

New to the Championship schedule in 2013 was the PGA Tour Canada TOUR Championship of Canada presented by Freedom 55 Financial. This event was conducted by Golf Canada in partnership with the PGA Tour Canada. Held at Sunningdale Golf & Country Club in London, Ontario, the 2013 champion was Université Laval alum, Max Gilbert. Five exemptions to the Web.com Tour were handed out at the conclusion of the championship. Mackenzie Hughes of Dundas, ON, Riley Wheeldon of Comox, BC, Mark Hubbard of San Jose, CA, Hugo Leon of Chile, and Wil Collins of Albuquerque, NM earned their ticket to the Web.com Tour as the top five finishers on the PGA Tour Canada’s Order of Merit.