Reed on a roll, wins a World Golf Championship 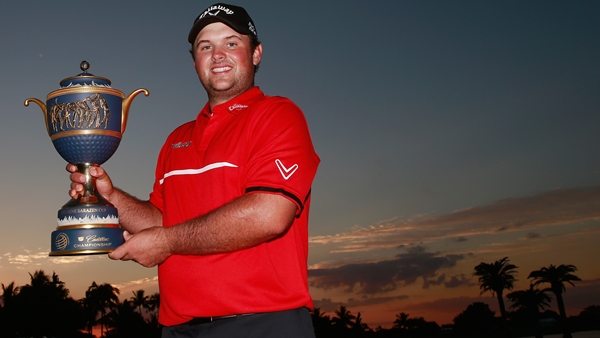 DORAL, Fla. – Patrick Reed felt he belongs among the best in the world. He beat them all Sunday in the Cadillac Championship.

Dressed in a red shirt that he always wears in the final round – with Tiger Woods in the group ahead of him – Reed made back-to-back birdies early on the front nine to build a big lead and showed off a great short game when the pressure was building on the new Blue Monster at Doral.

Equipped with a two-shot lead, the 23-year-old Texan wisely played the final hole conservatively. He two-putted for bogey and closed with an even-par 72 for a one-shot victory over Bubba Watson and Jamie Donaldson of Wales.

Reed became the youngest winner of a World Golf Championship, his third win in his last 14 tournaments.

Woods, only three shots behind going into the final round in his best chance this year to win a tournament, said his back flared up after an awkward shot out of the bunker on the sixth hole. He failed to make a birdie in the final round for the first time in his PGA Tour career, and his 78 was his worst Sunday score ever.

Reed is expected to go to No. 20 in the world ranking. In his own ranking, he feels he belongs in the top five.

“I don’t see a lot of guys that have done that besides Tiger Woods and the legends of the game,” Reed said. “I believe in myself, especially with how hard I’ve worked. I’m one of the top five players in the world. I feel like I’ve proven myself.”

He joined some exclusive company. Since 1990, only Woods, Phil Mickelson, Rory McIlroy and Sergio Garcia had three PGA Tour wins before turning 24.

This was not an accident, either.

Reed has had a share of the lead going into the final round of all three of his victories – the Wyndham Championship last August, the Humana Challenge in January and a World Golf Championship at Doral that featured the strongest field so far this year.

His last two wins were wire-to-wire, including ties.

Watson, who won at Riviera three weeks ago, went bogey-free over the final 27 holes, a strong performance on the overhauled Trump National Doral. He closed with a 68, finishing with par after blasting through the palms, into the grandstand and back into the rough.

Donaldson wasn’t so fortunate. He hit into a foot on the 17th for his third birdie on the back nine to get within one shot of the lead. From the 18th fairway _ after watching Miguel Angel Jimenez go through the green and into the water – he blocked his approach away from the flag and into the back bunker. Donaldson blasted out to just inside 15 feet and missed the par putt. He closed with a 70.

Reed, Donaldson and Watson were the only players to finish under par.

Dustin Johnson, who lost momentum around the turn, made double bogey on the 18th hole for a 72 and tied for fourth with Richard Sterne (71).

Woods went into the final round with a chance to win for the first time all year.

He beaned and bloodied a spectator on the opening hole and missed a 10-foot birdie putt. He beaned another spectator on No. 3, kicking the ball back into the fairway, only he followed that with a shot into the water and made bogey. Woods made two more bogeys over the next three holes and was an afterthought. He said the pain intensified after his bunker shot on the sixth.

Woods had his left foot in the sand and his right foot flexed against the lip of the bunker.

“That’s what set it off and then it was done after that,” he said. “Just see if I could actually manage … keep the spasms at bay.”

The results are not very promising on his short road to the Masters. Woods has played only four tournaments, and only twice went 72 holes. He missed the 54-hole cut at Torrey Pines, tied for 41st in Dubai and withdrew after 13 holes in the final round of the Honda Classic last week.

He is scheduled to make only one more start – Bay Hill in two weeks – before Augusta National.

The other guy in the red shirt and black pants played like he knew what was doing with the lead. Reed left no doubt early that it would be his tournament to win.

His two-shot lead dwindled to one after a bogey from the bunker on the second hole, and that was as close as it got until it no longer mattered.

He knocked in a 25-foot birdie from the back of the green at No. 3, He holed an 18-foot birdie putt on the tough par-3 fourth. Jason Dufner, playing in the final group, went into the water on the fourth to begin his quick slide. Reed made par on the next nine holes, and only in the final hour was the outcome ever in doubt.

Canada’s Graham DeLaet finished 34th after shooting a 2-over par 74.