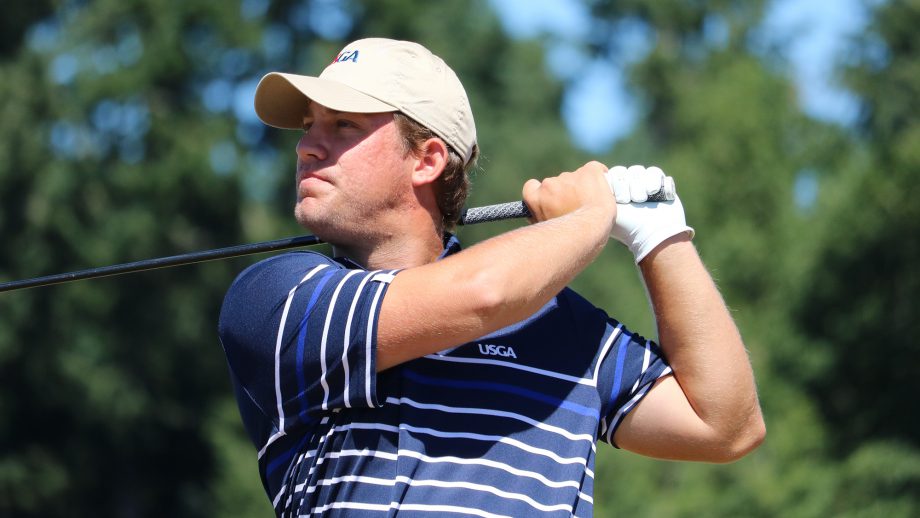 QUALICUM BEACH, B.C. – Defending champion Zach Bauchou battled the extreme heat in Tuesday’s second round with a 3-under 68 to extend his lead to three strokes at the 114th Canadian Men’s Amateur Championship.

“With all the par-3s you’re going to have to hit a lot of mid-irons—I was able to hit some really good shots and I putted really well too,” said the 22-year-old, greenside at No. 18. “I had some nice looks that I capitalized on today.”

The Oklahoma State junior grew his lead by one stroke on Tuesday and looks to stay aggressive in Wednesday’s third round.

“The goal is just to play as good as I can and make as many birdies as I can,” said Bauchou. “I’ve had some short game errors where I didn’t get up-and-down, so I’ll be looking to sharpen up my short game over the next two days and keep playing aggressively—pedal to the medal.”

Alone in second place is Gatineau, Que., resident Julien Sale, who shot a 2-under-par 69 at Pheasant Glen to move to 6 under for the tournament, three back of Bauchou.

“I’m just trying to put the ball in play and then go for the green and get the putter working well,” said Sale, who grew up in France. “For tomorrow, I’ll see if I need to be a bit more aggressive depending on how the other guys do.”

Congrats to Team Quebec, who captured the #CDNAm inter-provincial competition by 7 strokes to capture the second straight Willingdon Cup 👏🏼👏🏼

Team Alberta was the only other team to finish under par, closing with a score of 3 under to finish alone in second place.

Also making significant moves on Tuesday were Garrett Rank and Justin Warren. Rank, an Elmira, Ont., native and Team Canada graduate, shot a 65 to tie the course record at Pheasant Glen. The 30-year-old climbed into a five-way tie for sixth place at 3 under for the tournament.

At Duncan Meadows, Australian Justin Warren carded a scorching 64 to set the new course record (Bauchou tied the old record of 65 on Monday). Warren, a senior at Little Rock, sits tied for 24th at even par.

A total of 71 players who finished 3 over par or better have advanced to the final two rounds of the Canadian Men’s Amateur Championship to be contested at Duncan Meadows.