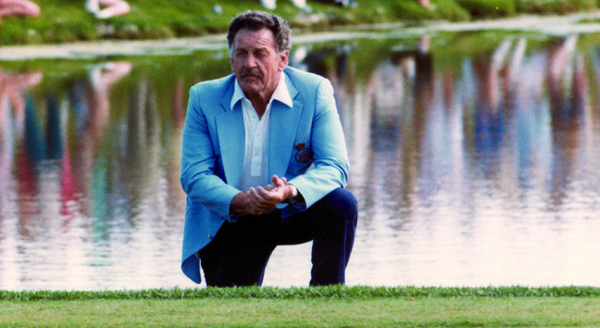 I’ll miss the usual phone call this year from the man I called the “godfather of Canadian golf.”

Many more knew him as “Mr. Canadian Open.”

The call I always counted on, well, since the mid-1980s when we first met, would come a week or two before the RBC Canadian Open whenever it was played at Glen Abbey Golf Club in Oakville, Ont. It will return there July 20-26 for the 27th time.

But the phone call won’t come this year.

“Goose,” the gravelly voice would say (more about that nickname shortly), “when are you going to be there? Where do you want to meet?”

That unmistakable, and now sorely missed, voice belonged to Richard H. Grimm, who passed away a year ago, on May 26, at the age of 91.

It is well documented that Glen Abbey would not exist without Dick Grimm. Here is a précis.

He, along with another great gentleman of the game, the late Bruce Forbes, had the vision of a permanent home for our Open. Forbes, a successful businessman from Brantford, Ont., had been president of the Royal Canadian Golf Association (now Golf Canada) in 1965 and became its executive director in 1970. Dick’s involvement with the Open began when he, as president of the host club, chaired the 1965 Open at Mississaugua Golf and Country Club. He went on to chair the event seven more times and joined the RCGA as director of professional tournaments from 1983 to 1992. I was fortunate to work with him there for a couple of years.

(There’s lots more on his Canadian Golf Hall of Fame resume, which you can read here. All that and more was recounted a year ago in various obituaries, the finest of which is by Lorne Rubenstein, who was very close to Dick. You can read it here. Do so, and you will understand why I called him the godfather of Canadian golf.)

In 1972, when Dick was chairing the Open at Cherry Hill near Fort Erie, Ont., he was approached by Rod McIsaac, principal of Great Northern Capital. “He told me he liked watching the tournament but it was his feeling that the gallery was not given a fair shake for viewing,” Dick told me when I was writing my book, The Great Golf Courses of Canada. “Immediately, I thought, ‘Here’s another gripe from a spectator.’ But then he threw me for a country mile by saying he had a piece of property in Oakville—and we [RCGA] were thinking of a permanent site for the Open.”

The deal was done and Dick and Bruce persuaded Jack Nicklaus to design Glen Abbey, his first solo design, and one that has stood the test of time as one of the best spectator courses in the world since it opened in 1976. And woe betide anyone who said differently if Mr. Canadian Open was within earshot.

Once, just once, early in our friendship, when I was editor of SCOREGolf, I made the mistake of criticizing something, I forget what, about the Open and/or Glen Abbey in print. The next time I saw Dick, he called me “Goose.”

“Because the Canadian Open is the goose that lays the golden egg for golf in Canada and I never want you to forget that.”

So “Goose” I remained until the day he died. I counted it an honour that he had a nickname for me. I called him “Godfather.” I am not sure he was so honoured. But he smiled when I called him that.

Although age and illness had cruelly, inevitably, turned him into a shadow of the imposing physical presence he once was when he passed away a year ago, Dick Grimm will remain a giant, figuratively, in Canadian golf forever.

No one knows that better than Bill Paul. Bill, now Chief Championship Officer at Golf Canada, who first met Dick almost 40 years ago. Dick not only got Bill, then a high-school student, into golf, but inextricably involved him in the Canadian Open which has become his life’s work, not unlike his mentor. Even after Bill took over Dick’s responsibilities in 1993, the two, teacher and student, still met frequently to talk about our national championship.

“He was always generous with his time and his advice,” Bill recalls. “The Open was so close to his heart. Although we didn’t always agree, he really was a great man, and a great person, in so many ways. If I had a wish for one thing to end my career on, whenever that may be, it would be to return the Open to a permanent site. It’s funny how all that may circle back to the vision he had. In a way, it would be a tribute to him.”

I will miss my friend’s pre-Open phone call this year, and the golf we played when he was healthy, and the lunches we shared as his health declined (“Hey, Goose, how about a bowl of soup and a bun at Bayview?”), and so much more, until I die. It’s not often you get to spend time with a legend.

But I will go again to the Open at Glen Abbey this July to honour his memory. I’ll wander around just below the clubhouse, where you can see the 16th green, the second green, the tee on the par-3 third, maybe the 17th tee if you squint, and remember the man who made this all possible.

Dick Grimm went to his grave a year ago intent, as always, on giving everyone “a fair shake.”

For the most part, he succeeded admirably.

So please take a minute on May 26, and whenever the Open rolls into Glen Abbey, remember the man who made it—and so much more in Canadian golf—happen.