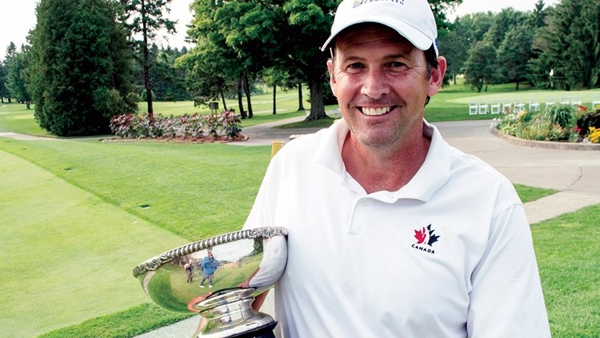 The recently turned 50-year-old out-duelled Ken Tarling and Jean Laforce enroute to his dramatic playoff victory. With the win, Bouchard adds his name to an impressive list of past champions including Moe Norman, Stan Leonard, Bob Panasik, Al Balding and Jim Rutledge.

“When I drove in earlier this week and I saw the signs with all the past winners I was pretty inspired,” Bouchard admitted.

Bouchard, Laforce and Tarling finished the 36-hole championship at 7-under-par 133, one shot better than David Miller. Marc Girouard finished at 5 under and rounded out the top five.

With the win, the native of Candiac, Que., is a three-time PGA of Canada champion, winning the 1988 and 2008 PGA Assistants’ Championship of Canada.

“The lie I had was just good enough that I could get a club on it and I knew if I hit it solid it would cut a little bit,” Bouchard said about his 254-yard 3-wood approach on the first playoff hole-the 518-yard 18th hole. “When it left the club I knew I hit a perfect shot.”

Bouchard’s two-putt birdie was good enough as the clincher with both Laforce and Tarling failing to convert their birdie attempts.