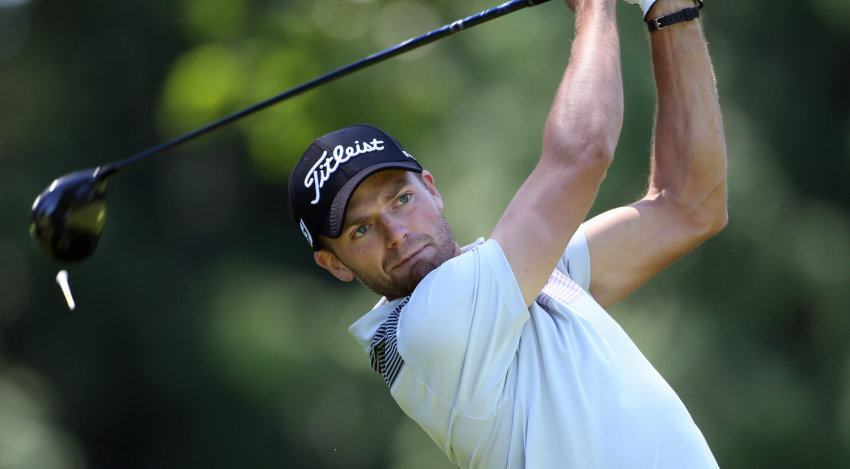 CALGARY – Victoria, British Columbia’s Cory Renfrew shot a 6-under 64 on Friday at The Links of GlenEagles to take the 36-hole lead at the Mackenzie Tour – PGA TOUR Canada’s ATB Financial Classic.

“I just kind of stayed patient all day. We were just having fun out there. I just kept hitting good shots and seeing putts go in, so I’m looking forward to the weekend,” said Renfrew, who already owns a Mackenzie Tour win in Alberta at the 2012 Syncrude Boreal Open presented by AECON in addition to 10 career top-10s. Renfrew finished T4 at the ATB Financial Classic last year.

Teeing off on the back nine, the University of British Columbia grad opened with seven straight pars, then made three birdies in a row on holes 17, 18 and 1 to kickstart his round.

“That kind of got me going, and I just felt comfortable after that. I drove the green on 17, which was nice, and just kind of rolled from there,” said Renfrew, currently 41st on the 2015 Order of Merit.

Earlier, Khan fired an 8-under 62 to match the GlenEagles course record, while Miernicki and Brun carded rounds of 66 and 67, respectively, to reach 10-under.

“I made some long putts early and I think that got the putter going. It was kind of spread out. It felt like every three holes I made birdie, and it was good,” said Khan, who posted eight birdies and was without a bogey.

The 26-year old, who has conditional status on the Mackenzie Tour and is making just his third start of the season, said he relished the opportunity to get a start this week in Calgary and was ready to take advantage.

“I was able to go back and practice and stay ready,” said Khan, who found out on Sunday he got into the field. “I’ve just been kind of working on the game and preparing myself mentally. You never know if you’re in or you’re out, so you just try to prepare for a tournament.”

Letzig, the winner earlier this year at the SIGA Dakota Dunes Open presented by SaskTel, was two shots back in his first start since a three-week break to be at home for the birth of his second child, daughter Raleigh Caraline, along with 2012 ATB Financial Classic champion Michael Gligic or Burlington, Ontario and Olympia, Washington’s Cameron Peck.