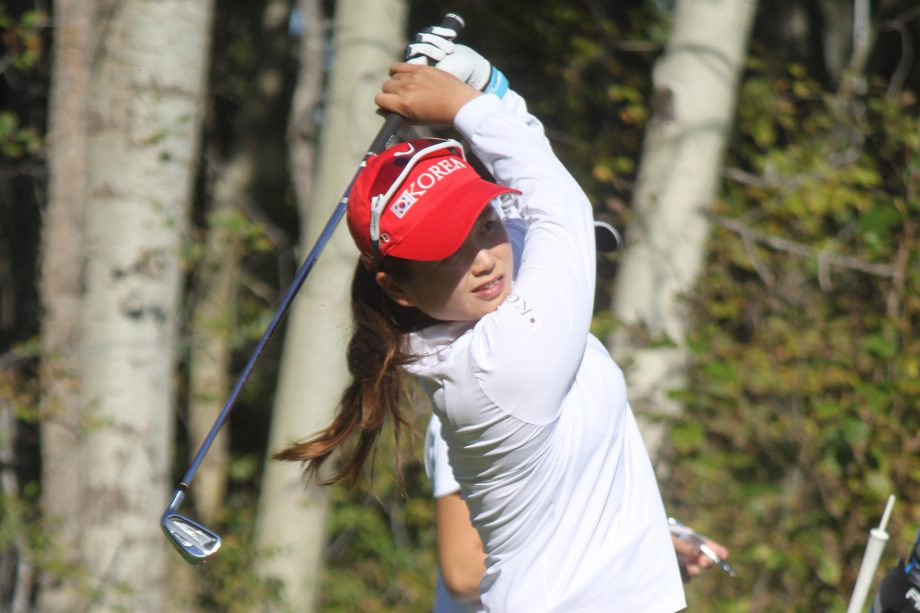 It was a beautiful day at The Marshes Golf Club in Ottawa as the 2015 World Junior Girls Championship officially began. This year’s competition has gathered 14 countries, 15 teams and 44 players in the nation’s capital.

Making their debuts in this year’s event are teams representing the People’s Republic of China, the Republic of Korea and France, who join returning countries Canada, Australia, Denmark, England, Finland, Italy, Mexico, Norway, Spain, Sweden and the defending champions from the United States.

With the lowest two scores from each round counting towards the team’s daily total, Korea took the opening-round lead at 2-under 142. Hye-Jin Choi led her team with a round of 2-under 70 while Eun-Soo Jang shot even-par. The third member of the team, Shin Hye Kim, posted a 4-over-par performance.

After the round, Korean coach Sang-Won Ko reflected pensively on his team’s first round. “I told the team that they were leading at lunch, but that they could have been playing even better. I think all three can work on their putting heading into the second round. It is always a great experience to be a member of a team that represents Korea, it’s all the motivation they need.”

Choi’s round of 70 also has her tied atop the individual competition. Despite her share of the lead, the 16-year-old laments the opportunities she was unable to capitalize upon.

“It is hard to pinpoint one particular strength of my game today. I finished with five birdies, but could have had more,” said Choi. “I missed a few chances that could have led to two or three more birdies. Having a share of the lead is nice because it makes me comfortable heading into the rest of the tournament. I just have to play even better tomorrow now that everyone is warmed up.”

Two shots back of Korea in the team competition are the United States and Sweden who both sit at even-par 144. Team USA was led by a strong performance from Elizabeth Wang who holds a share of the lead.

“I started out pretty well with my putting really helping me out,” noted Wang. “I got a little tired on the back nine and my putting suffered. This is a very beautiful course, the greens are pretty firm, each hole is unique and you can definitely score on the course.”

The San Marino, Calif., native beamed with pride when asked about taking part in this competition. “This event is just such a privilege for me to represent the United States and I am very grateful for the opportunity.”

Also factoring into the team score was Alyaa Abdulghany of Newport Beach, Calif., who finished 2-over 74. Completing the American contingent was Frisco, Texas native Courtney Dow who carded a 5-over 77.

Sweden – last year’s silver medalists – counted Frida Kinhult and Filippa Moork’s identical even-par rounds. The pair’s performances have them knotted in an 11-way tie for fourth. Elin Esborn completed the day at 1-over 73.

Both Canadian sides finished with room for improvement following the first day of competition. Team Canada Two made up of B.C. natives Euna Han (Coquitlam), Alisha Lau (Richmond) and Katherine Chan (Richmond) finished at 7-over 151 while Team Canada One consisting of Grace St-Germain (Orleans, Ont.) Hannah Lee (Surrey, B.C.) and Tiffany Kong (Vancouver) were 8-over.

Team Canada Two coach Mike Martz sees positives to be taken from his team’s performance. “I think they did a good job today. They didn’t have the greatest start, but they fought really hard on the back nine to come back two or three shots. They could have just folded, but they pulled everything together and fought back. We will put some work in today and hopefully they will be able to continue to improve tomorrow.”

For full tournament information, including the leaderboard and pairings see the tournament site at www.worldjuniorgirls.com.