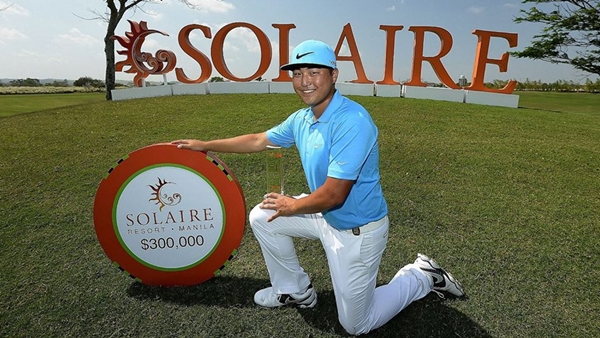 Lee, a Toronto native, overcame a four-shot deficit in the final round thanks to a 2-under-par 69 at The Country Club. The 23-year old finished 7-under par and defeated Thailand’s Chawalit Plaphol by a single shot to win his first Asian Tour title and a $54,000 (U.S.) winner’s cheque.

Overnight leader Angelo Que was on track to pick up his fourth Asian Tour win before disaster struck on the par-five second hole. He made  a 7-over-par 12 after hitting three out-of-bound tee shots.

Carlos Pigem of Spain shot a 69 and finished third at 5-under. Steve Lewton of England, Paul Peterson of the U.S. and Masahiro Kawamura of Japan tied for fourth at 4-under.

“This win means so much to me and it opens so many doors,” said Lee. “To be honest, I felt like I was in contention for the first three days. I shot under-par each day and I knew that if I could came out on the last day to play the way I did then I would have a chance to win. I’m glad I did just that.”

Lee, whose parents are Korean, was ecstatic with his maiden victory after enjoying a solid rookie season on the Asian Tour in 2013 where he finished 32nd on the Order of Merit.  However, there was a sense of disappointment as he had to watch his good friend Que walk away empty handed.

“It was a learning experience for me on the Asian Tour last year. I met some great people like Angelo Que, Unho Park and Lam Chih Bing. They are good players and I learned a lot from them. I wished Angelo luck yesterday and told him to play his best. It was unfortunate to see what happened to him,” added Lee.