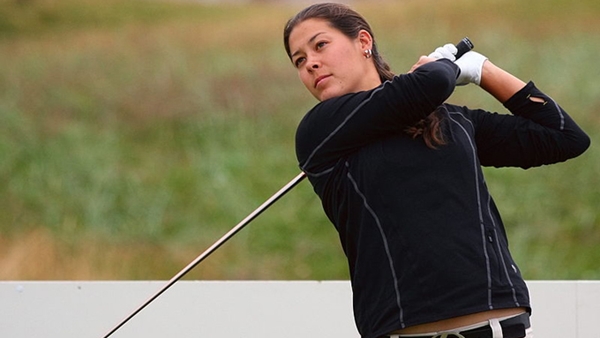 She didn’t expect to stay there.

“I wouldn’t be surprised if someone gets me by two,” Kim said.

Ariya Jutanugarn, coming off consecutive wins on the LPGA Tour, was a shot back after her morning round at Travis Pointe Country Club.

The course conditions got tougher later in the day when the wind picked up and the pins got tougher to shoot for on drying greens.

Second-ranked Inbee Park’s lingering thumb injury led her to withdraw from the tournament. Haru Nomura and Perrine Delacour also were unable to complete their first rounds.

Kim ended a 24-round streak in which she didn’t break 70, but wasn’t surprised.

The three-time LPGA Tour winner, though, was able to withstand her relative slump because of her perspective on the game and life.

“At the end of the day, you know, things will balance out,” Kim said. “We all end up six feet under.”

The 20-year-old Jutanugarn is coming off a victory at the Kingsmill Championship after becoming the first Thai winner in tour history in Alabama.

One of her friends saw this coming.

“She’s been playing like this since she was 17 years old,” Kim said. “I think that for her it was just a matter of breaking the shell and getting over that first hump and getting that first win. She is going to just be an absolute world-beater.”

Kim might be one of the people who paves the way after she was in a rough patch of her career.

“Last year, I played bad,” Jutanugarn recalled. “And, she the only person come and talk to me.”

Jutanugarn played through a stiffer wind on her back nine, competing well enough to give herself a chance to possibly win three straight tournaments.

Her ability to play without a driver in her bag or a 3-wood in her hand may help her make the most of opportunities on a layup set up to give players success.

“The course pretty firm so I not even need to hit 3-wood,” Jutanugarn said. “Two-iron fine because I can keep it low.”