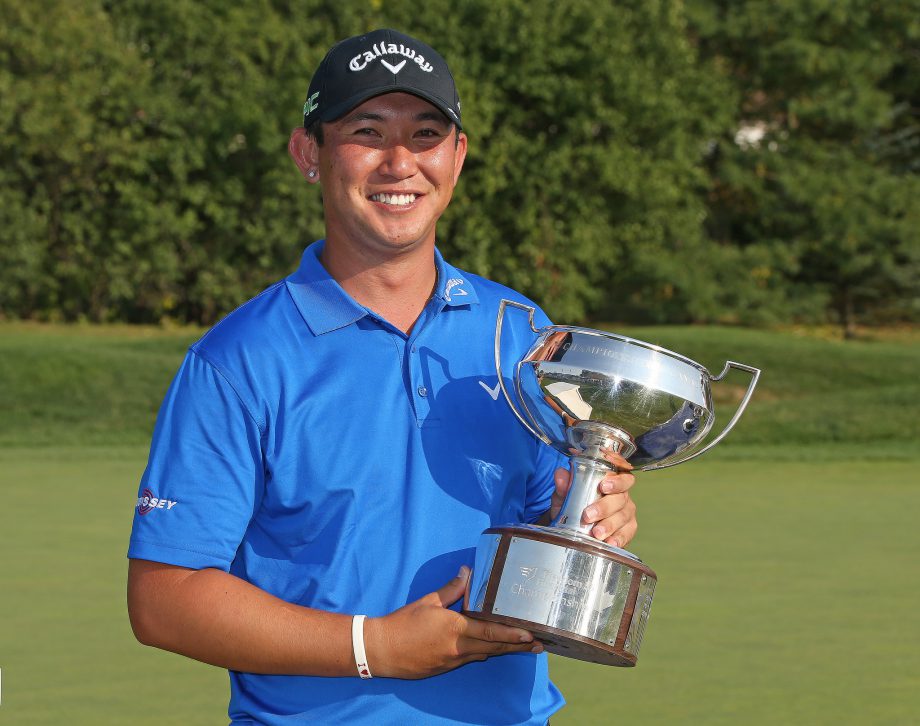 It was better late than never for Rico Hoey, who captured his first Mackenzie Tour – PGA TOUR Canada victory on Sunday at the season-ending Freedom 55 Financial Championship to earn a spot in The Five and secure Web.com Tour status for 2018.

The 21-year old University of Southern California grad shot a final-round 3-under 67 at Highland Country Club to finish at 19-under total and win by one over Mequon, Wisconsin’s Jordan Niebrugge, with the win vaulting Hoey from 11th to fifth on the Order of Merit.

For Hoey, it was an emotional win, with an outpouring of relief, elation and gratitude for his family’s support showing after his win.

“I knew I had to shoot a good score to get myself into the top five. I’m just glad I gave myself a shot and I pulled it off,” said Hoey through tears afterwards. “It’s nice doing it for my family. They believe in me so much, so it’s kind of nice knowing I have support, so I’m just doing it for them.”

Starting the day with three-stroke advantage over Greyson Sigg, Brett Lederer and Cody Blick, Hoey started strong with four birdies in his first six holes to extend the lead to four. A host of challengers emerged, however, including former World No. 1 Amateur Chris Williams, who was 8-under after an eagle at 11 holes to pull within one stroke.

Hoey, however, did enough to bend but not break with the lead, eventually making birdie at the 17th hole to build a two-stroke lead heading to the 72nd hole and all but guarantee victory. After a tap-in bogey at the last, the victory – and charge into the top five – was complete.

“It’s hard,” said Hoey “not to think about everything that comes with winning. I just tried to block that out and play one shot a time. I was hitting good putts and I’m just glad I made the putt on 17 that gave me a two-shot cushion.”

Du Toit, the Freedom 55 Financial Canadian Player of the Year, made the cut in all 11 of his starts this season and recorded three top-10 finishes in his first season as a professional after completing his amateur career at Arizona State University this spring.

“It means a lot to me. I pretty well hit the ground running this season, and there’s plenty of room for improvement, so I’m excited about that. It’s been a whirlwind, but I definitely took the right steps in learning how to be a pro and hopefully that can continue,” said du Toit.

“We’re thrilled to see Jared put on a great performance this season and earn Freedom 55 Financial Canadian Player of the Year honours,” said Mackenzie Tour President Jeff Monday. “Our thanks and gratitude go out to Freedom 55 Financial for all their support of our Tour, including these awards. Thanks to them, some of our best and brightest players are able to take a big step forward in achieving their goals and dreams.”