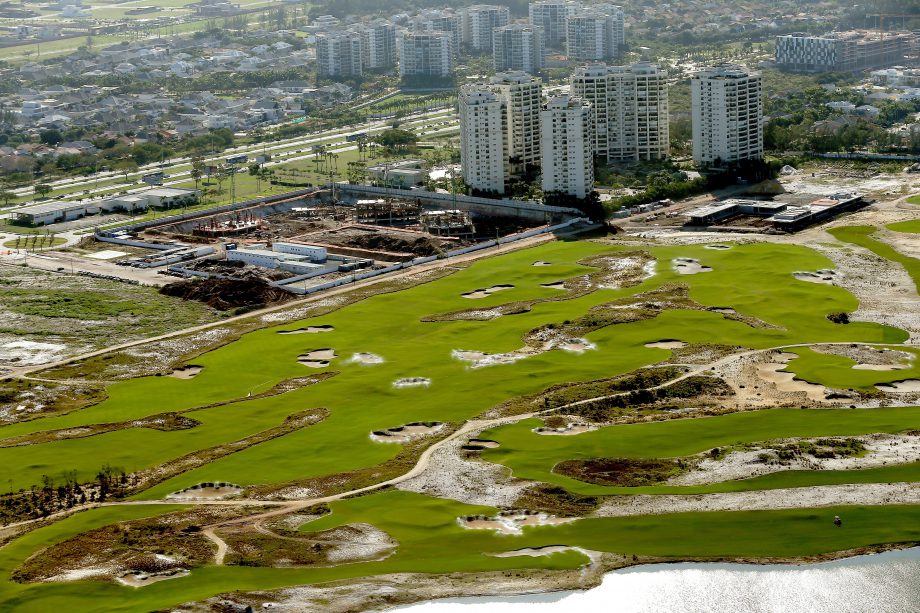 Rio de Janeiro’s Olympic golf course – slowed by environmental lawsuits, land ownership disputes and doubts it even needed to be built – was handed over Sunday to organizers of next year’s games.

Rio Mayor Eduardo Paes spent 15 minutes defending the course, built in the wealthy neighbourhood of Barra da Tijuca, where most Olympic venues will be located.

“If you are in politics, you always have to spend some time defending your point of view,” Paes said.

Paes spoke to several hundred guests and repeatedly thanked billionaire developer Pasquale Mauro, who stood alongside him. The developer is spending about 60 million Brazilian reals ($16.2 million) to build the course. He is also constructing luxury marble and glass high-rise apartments around the layout, which was created from a nature reserve.

The course is to remain public for at least 20 years, joining two private clubs in Rio.

The course took three years to build, and the stops and starts removed some of the glamor from golf’s return to the Olympics after a 112-year absence.

Construction started six months late. American golf architect Gil Hanse, who won the Olympic bid ahead of bigger names like Jack Nicklaus and Gary Player, complained early in the project he wasn’t getting paid by the developer and hinted at pulling out.

Lawsuits by environmentalists also slowed development, and there were several legal disputes about who owns the property, some of the most expensive land in the western Rio suburb.

Paes, who is mentioned as a possible candidate for Brazilian president, denied Sunday several reports that Mauro had donated to his political campaigns.

“No, not at all,” Paes said when asked by The Associated Press. “But it was not a problem if he had.”

Paes insisted Sunday that, although some of the nature reserve was bulldozed to shape the course’s grass mounds, the lion’s share was degraded land that had been a sand quarry.

The legacy for the sport is unclear.

Few people play golf in Brazil, and Paes has acknowledged the game probably has little future in the South American country. Some have compared building a golf course in Brazil to setting up a bullring in Finland.

“In Brazil I don’t think there’s much legacy for a golf course,” Paes said. “I’ve always said that. I don’t think this is something Brazil is very famous for, delivering courses. It’s not a popular sport in Brazil. But there are some things you need to do when you deliver the Olympics.”

“It’s a big legacy,” Nuzman said. “It’s a public golf course. There are a lot of young kids – boys and girls – who want to participate to develop golf. It’s a chance for golf in a new region of the world to be developed.”

The sure winner is probably the developer Mauro, who is building the course with private money. It follows the pattern of other Olympic projects in Rio, where large real estate interests have moved in. Another is the nearby Athletes Village – 3,600 high-end apartment units – that will be sold off after the games.

Brazil is spending about $10 billion to organize the games, a mix of public and private money, and is being buffeted by a deep recession with major cuts recently to the games’ organizing budget.

Alberto Murray Neto, a Sao Paulo lawyer and former member of the Brazilian Olympic Committee, said it was unclear why the city would press ahead with construction on legally disputed land. He and others have suggested that the Itanhanga Golf Club in Barra could have been remodeled for the Olympics, and at a lower cost.

“It seems that this is part of real estate speculation that will be favourable to the company that is building the luxury condominium just behind the Olympic course,” Murray said in an email to The Associated Press.