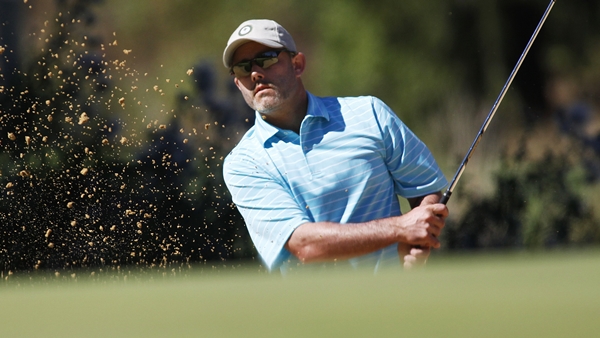 BARRIE, Ont. (Golf Canada) – Rob Couture edged into the lead at the Canadian Men’s Mid-Amateur Championship after a third round 3-under 69 at Barrie Country Club.

Couture, of Dallas, opened a three-stroke lead at the turn after a front-nine 4-under 32, but carded two bogeys on his closing stretch to finish a stroke ahead of Team Canada’s Garrett Rank at 5-under 211.

“I feel like obviously I can get it done and it’s one thing to hope you can get it done and think you can get it done but I know I can,” said Couture, the 2011 Mid-Amateur champion. “I don’t think there’s any concern with Garrett either, he’s won plenty of tournaments and he knows that he can do it too so I’m just going to go and try to play a really good round of golf, add it up at the end and see what happens.”

Playing alongside Couture, Rank of Elmira, Ont. cut into the lead with a back nine 2-under 34.  His third round 3-under 69 leaves him in striking distance of a spot into next year’s RBC Canadian Open and a second national championship title — Rank captured the Canadian University/College Championship Individual title in 2012.

“I finished well, I made three birdies in the last six holes so that was good because I think at one point he [Couture] had stretched out to five or six ahead of me,” Rank said. “I like being one back better than two back but I can’t really worry about what he’s doing. I just have to go out there tomorrow, control what I can control, stick to my game plan and continue to play some pretty good golf.”

Windsor, Ont.’s Michael Rutgers will join the final pairing on Friday after carding even-par 72. Rutgers sits in solo third at 1-under 215 for the championship, while Darren Shaw of Stoney Creek, Ont. is in fourth at even-par 216.

Shaw, the overnight leader, struggled in the third round with a 3-over 75, but remains ahead in the Mid-Master competition by three strokes over Calgary’s Kevin Temple.