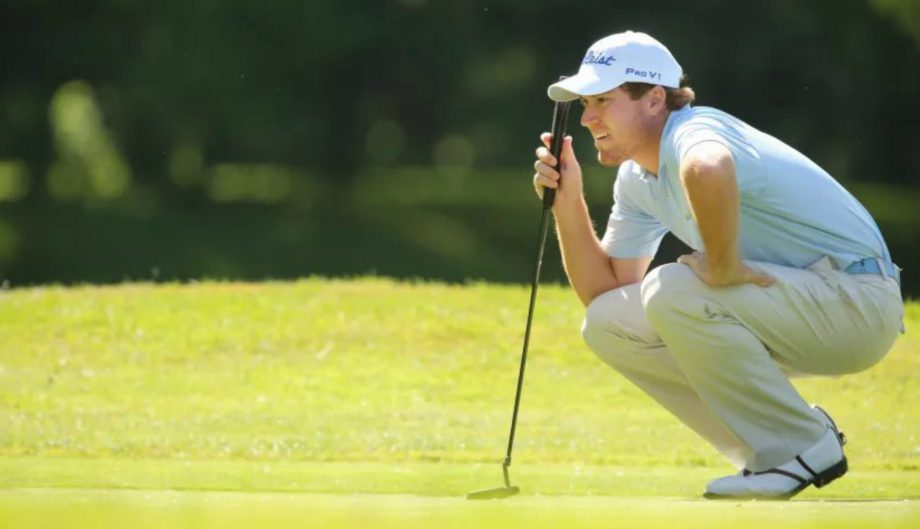 Wilmer, Alabama’s Robby Shelton cruised to a 6- under 65 on Saturday at Gallagher’s Canyon Golf and Country Club to extend his lead to three shots at the GolfBC Championship, the third event of the 2017 Mackenzie Tour – PGA TOUR Canada season.

The former University of Alabama standout made five birdies and an eagle against just one bogey on the day, finishing the day with a six-foot birdie putt at the 18th hole to lead by three over Ridgeway, Virginia’s Adam Webb heading into the final round.

“I’m striking it really well, and a few putts fell for me on the front nine to get the momentum going,” said Shelton, a three-time 1st team All-American at Alabama and a past U.S. Walker Cup team member. “I just cruised and everything’s working out for me.”

Beginning the day with a one-shot lead, Shelton found himself tied with Webb, Camarillo, California’s Johnny Ruiz and Costa Mesa, California’s Jake Knapp in the early going but put together a flawless front nine, capped by a 50-foot birdie putt at the ninth to take the outright lead.

“I’m throwing darts, and luckily a few putts fell,” said Shelton, who said the three-shot cushion puts him in the driver’s seat for Sunday’s final round. “I can put it on cruise control and hopefully someone doesn’t go stupid low.”

The 22-year old also benefited from some local knowledge on Saturday, with Gallagher’s Canyon Club Champion Dwayne Henry as his caddie for the weekend. “It was great. He definitely helped me with some reads, and it’s pretty cool to have the club champion on the bag,” said Shelton.

Webb shot a 6-under 65 to hold solo second, while Ruiz, Knapp and Danville, California’s Cody Blick were a shot further back in a tie for third at 13-under.

Shelton has held the solo lead after each round this week. The last player to lead outright after each round at a Mackenzie Tour event was Joel Dahmen at the 2014 Syncrude Boreal Open presented by AECON.

The last player to hold at least a share of the lead after each round of a tournament was Adam Cornelson at the 2016 Bayview Place Cardtronics Open presented by Times Colonist.

Team Canada National Team golfer Jared du Toit is T9 after a course record 10-under-par 61 on Saturday. Du Toit is playing in his second event as a professional .

““I was just thrilled to play the weekend and to go try and shoot a great score. I love playing as a single, so that was awesome for me. I tried to birdie every hole and give myself a good look, and I played well,” said du Toit.