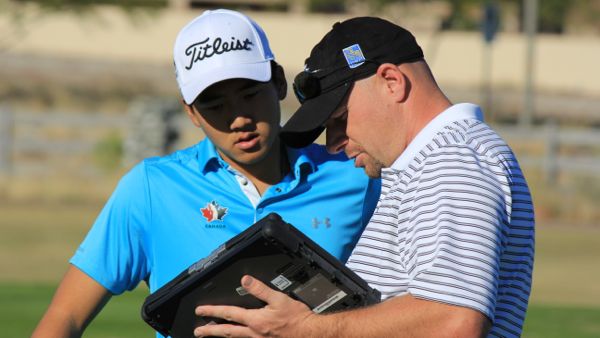 Robert Ratcliffe, Team Canada’s Development Squad Coach, has come home with yet another award for his coaching efforts in the 2013 season. The announcement was made by the PGA of Canada on Thursday along with eight other distinct award recipients.

Ratcliffe was recognized with the ‘Ben Kern Coach of the Year’ award, and will be honoured on “Canada Night” in January at the PGA Merchandise Show in Orlando, Fla. Each year, a national selection committee reviews application submissions for each award before deciding the year’s winners. The 2012 winner of the award was Jon Roy of Uxbridge, Ont.

Ratcliffe operates out of the Crown Isle Resort & Golf Community in Courtenay, B.C. and the Duncan Meadows Golf Club in Duncan, B.C. He also earned his third straight PGA of B.C. “Coach of the Year” award earlier this year. His 2013 season was highlighted by leading Team B.C. to all four gold medals at the Canada Summer Games in Sherbrooke, Que. as well as a gold medal at the Copas de las America’s tournament in Miami, Fla.

To learn about the other PGA of Canada award recipients, click here.

Team Canada alumni in the hunt at Web.com Q School

Many former members of Team Canada are chasing their coveted Web.com Tour Cards this week at the PGA West in La Quinta, Calif. There are six alumni vying for one of top-45 spots that earn exempt status until the Tour’s periodic re-order of the 2014 season. There are two of six rounds still remaining, with the final taking place on Tuesday.

To see all Canadians in the field, click here.

Q: What is your best golfing moment? (i.e. Tournament finishes, first eagle, hole in one etc..)
A: Hole-in-one at the AJGA Girl’s Championship in South Carolina (8th hole)

Q: What is your worst golfing moment, and the lesson you learned from it?
A: Missing the cut by just one stroke. I need to always play it one shot at a time

Q: Who is in your dream foursome?
A: Tiger Woods, Adam Scott, Inbee Park

Q: What is something most people don’t know about you?
A: I am obsessed with Korean drama!

Q: Do you have a favourite athlete?
A: Yuna Kim (figure skater)

Q: What is the best thing about your hometown?
A: The Inner Harbour and the Butchart Garden

Q: Favourite type of shot to hit?
A: Fade with my 7 iron

Q: What is the most surprising thing in your golf bag?
A: My White Teddy Bear (pocket sized)!

Q: If you could have a walk-up song on the first tee box, what would it be?
A: “Emotions” – Mariah Carey