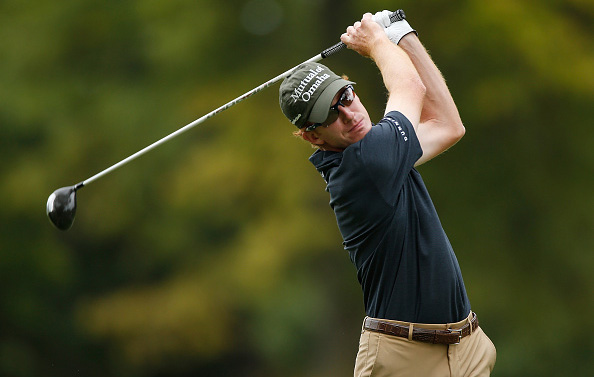 COLUMBUS, Ohio – Roberto Castro shot a 3-under 68 on Saturday to take a two-stroke lead in the Web.com Tour Finals’ Nationwide Children’s Hospital Championship.

Castro birdied the par-4 15th and 16th holes and closed with two pars to finish at 7-under 206 on Ohio State’s Scarlet Course. The 30-year-old former Georgia Tech player has played the PGA Tour the last four seasons, but slipped to 188th in the FedEx Cup standings to drop into the series that replaced Q-school.

The tournament is the third of four events for the top 75 players from the Web.com Tour money list, Nos. 126-200 in the PGA Tour’s FedEx Cup standings and non-members who earned enough money to have placed in the top 200 had they been eligible to receive points.

The top 25 players on Web.com Tour regular-season money list earned PGA Tour cards. They are competing against each other for tour priority, with regular-season earnings counting in their totals. The other players are fighting for another 25 cards based on series earnings, with Castro entering the week tied for 11th with $30,118. Last year, Eric Axley took the 25th card with $36,312.

Harold Varner III, Robert Garrigus and Zack Fisher were tied for second at 5 under. Varner had a 66, Garrigus shot 67, and Fisher 69.

Varner finished 25th on the Web.com Tour money list to earn a PGA Tour card and has made $22,902 in the finals to jump to 20th.

Garrigus, the winner of the PGA Tour’s 2010 Children’s Miracle Network Classic, was 174th in the FedEx Cup standings. He missed the cuts in the first two series events.