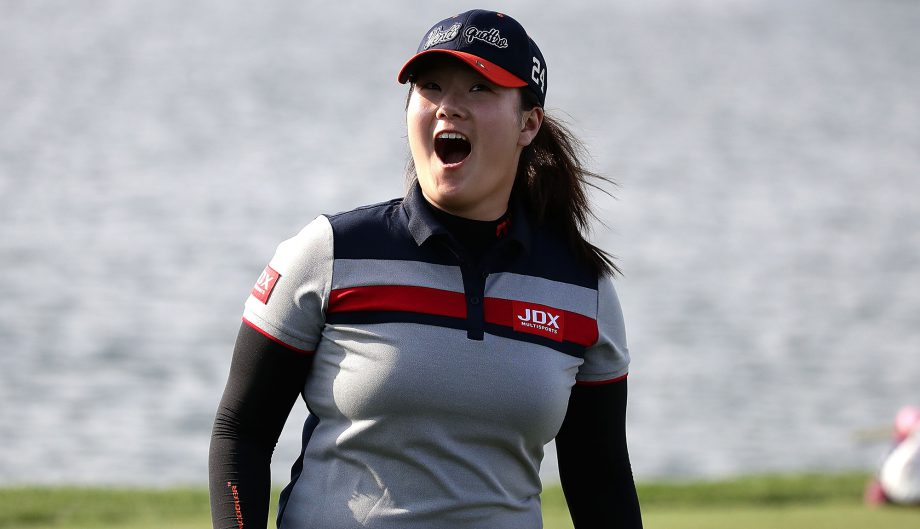 LPGA Tour rookie Angel Yin once again overpowered the par-five holes on the Ocean Course with her prodigious hitting to charge two strokes clear after the second round of the LPGA KEB Hana Bank Championship on Friday.

On a sun-kissed day at SKY72 Golf & Resort, Yin fired a sizzling seven-under-par 65 to post an 11-under total of 133, the highlight of her round coming at the par-five fifth where she struck a 6-iron to 12 feet and coolly sank the eagle putt.

“That got everything started,” said Yin, who went on to record six birdies and one bogey as she rocketed to the top of the leaderboard. “I made a few pars in the beginning, but that eagle just fired everything up.

“The par-fives, I’m able to hit irons into them, which is very helpful. I can get closer. Like with my eagle, I hit a 6-iron in and ended up with a 12-foot putt. The last hole, the par-five 18th, I had a 4-iron in. Irons, you get more accuracy on them.”

Yin covered the four par-five holes in a blistering five-under to shoot the equal low round of the day, local favorite In Gee Chun having earlier carded a 65 to share second place with World No. 2 Sung Hyun Park (69) and Jin Young Ko (67).

In Gee, a two-time winner on the LPGA Tour is still hunting her first victory of the season, having recorded five runner-up spots among her eight top-10s in 2017. However, she prefers to dwell on the positives of her near-misses rather than on the negatives.

“I’m quite proud of myself for maintaining the scores that I have been showing lately,” said In Gee, who along with Sung Hyun attracted the biggest galleries of the day on the Ocean Course. “And this event as well I’m kind of playing without any really negative thoughts. In that sense, I look forward to the weekend. Also I put a lot of meaning in this event, especially that I can have more fun with my fans.”

Canada’s Brooke Henderson rebounded in Friday’s second round with a 5-under-par 67 to climb into a tie for 13th place with Lexi Thompson. Alena Sharp of Hamilton, Ont., registered an even-par 72 to sit in a tie for 55th.