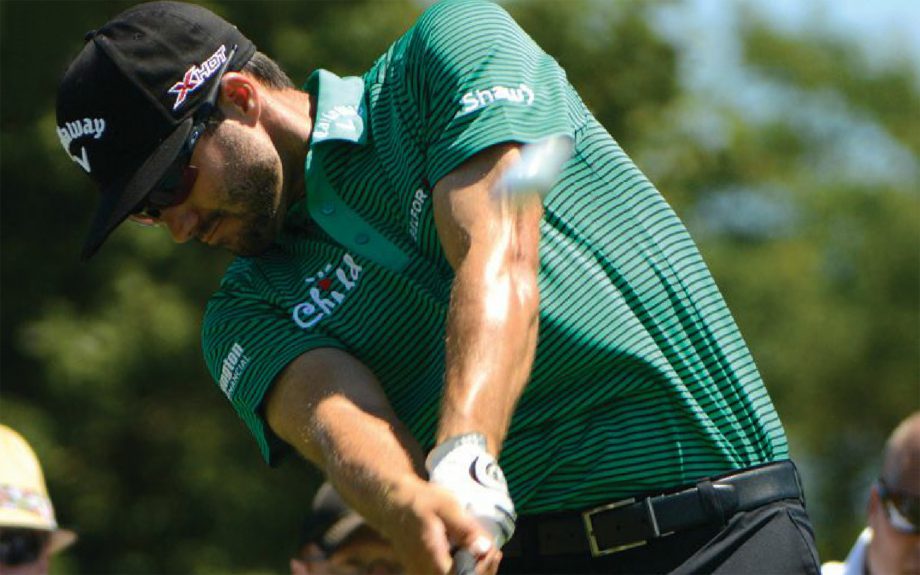 Adam Hadwin is driving to his hotel room in Florida during the week of the Honda Classic, and his fully loaded courtesy car is beeping at him. The navigation system feels that he’s starting to drift into the next lane. He doesn’t know why, because he’s right in the middle, driving straight ahead.

For the PGA TOUR rookie, whether it’s on the road or the golf course, he knows his path.

“I’ve been working most of my life to get to this point, where I’m at right now,” the 26-year-old says.

Sometimes, Hadwin admits, it’s great to see how far he’s come.  But he’ll be the first to tell you there’s more he wants to achieve.

“I get a text message every time a week is over with updated results.  If I play well and have a decent stretch, you see how much money you’re making and you’re like, ‘wow, that’s pretty good,’” Hadwin says.  “But I’m not that concerned with the money.  That’s great, but I want to win.  That’s the biggest thing.”

Hadwin has been a winner on every level in his golf career so far.  He was a celebrated junior and amateur golfer in British Columbia before moving to the University of Louisville.  After turning professional, he won three times on the Vancouver Golf Tour, before winning twice on PGA TOUR Canada (then the Canadian Tour).

Hadwin is fully exempt on the PGA TOUR for the first time after two years on the Web.Com Tour.  He won twice in 2014, but he’s looking for more this year on the biggest stage in golf.

But, even with this steadfast determination, he doesn’t let the cool parts of being a PGA TOUR member pass him by.

He nearly made the PGA TOUR for 2013, but finished just outside the required position on the Web.com Tour.  He ended up struggling in 2013, but then enjoyed a breakout season last year.

“I feel like I’ve gotten better every year, even though I kind of regressed in 2013 and had a terrible year,” explains Hadwin.  “I didn’t play well on the Web.com Tour, but I still felt that I was a better player at the end of the year then at the start of the year.”

Not only did Hadwin earn his PGA TOUR card thanks to his 2014 season on the Web.Com Tour, he can also pick-and-choose his schedule for the entire year without having to think about priority rankings or re-shuffles. He acknowledges this has loosened him up a bit, knowing that he didn’t need to play well early in the season to guarantee entry into more tournaments as the year goes on.

But that hasn’t changed his approach to the job at hand.

“I’m not playing reckless because I’m guaranteed a bunch of events,” he says.  “I’m out there to practice on the golf course, figure out a game plan and stick with it.”

Hadwin says he made some small swing changes in the off-season, and he tweaked his grip.  After 10 events, he says he was starting to see some of the benefits of these improvements. This, he hopes, will help lead him to the winner’s circle soon.

“It would be a huge stepping stone in my career and the next step I need to take,” Hadwin admits.  “Getting a win in my rookie season would be huge, and a huge boost of confidence.  But, if I don’t win for, say, four more years but I’m still ac tive on the Tour?  I may be disappointed, but I’m really trying to have a more long-term perspective on things.”

This summer will mark four years since Hadwin’s best PGA TOUR finish: a T4 at the 2011 RBC Canadian Open at Shaughnessy Golf & Country Club.  He says he took a lot away from that week, and there is quite a bit that he still hangs on to.  He’s excited to be able to come into this year’s RBC Canadian Open as a full-time PGA TOUR member.

“It’s always great to come back to Canada,” he explains.  “Having a full Tour card is going to be a lot different, because usually I treat the Canadian Open as a one-off event.  It’ll be nice to go there as a full Tour player this year and approach it like every other week.” So while he drives towards a long career on the PGA TOUR, if you were to ask what motivates Hadwin, it’s, well, Hadwin.

“I love to compete, and it’s not even competing against everyone else, it’s about competing with myself and getting better,” he says.  “I found something I’m good at, and something I enjoy.  I’ve always been competitive with anything I’ve ever done, and it’s just been a lot of fun.”