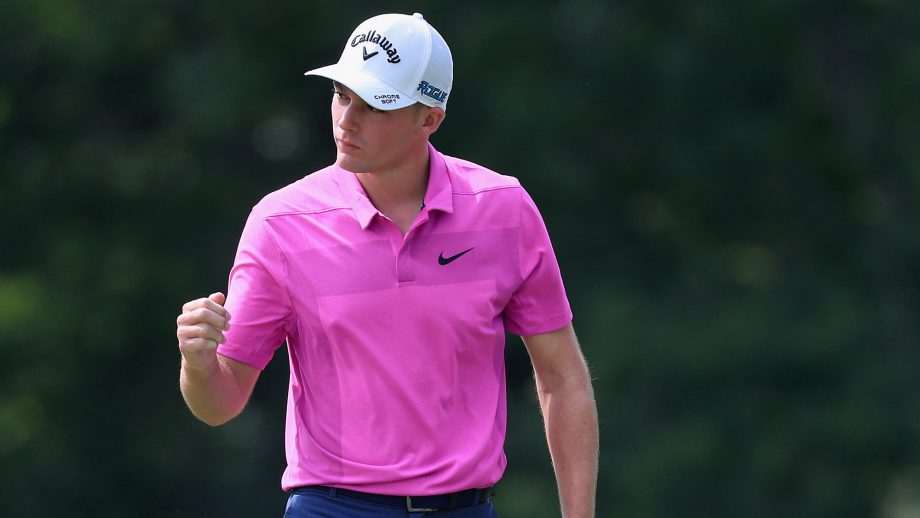 DALLAS – The wind finally blew on the new Trinity Forest course at the AT&T Byron Nelson.

Aaron Wise wasn’t rattled, not even by a bogey that dropped him into a tie for the lead on the final hole Saturday. Now the 21-year-old PGA Tour rookie is ready for another run at his first victory.

Wise shot a 3-under 68 to pull even with Marc Leishman, four shots ahead of Matt Jones and Kevin Na going into the final round.

It’s not the first time Wise has been in this position, though. Two weeks ago, he finished tied for second at the Wells Fargo Championship, two shots behind Jason Day.

Besides, Wise has won at every level – including the 2016 NCAA individual title while helping Oregon win the team championship just before turning pro. He was the first player in eight years to pull that NCAA double.

“There’s a little more pressure on it because there’s more people and it’s a bigger scene, but I felt like I did a great job of handling all that at Quail Hollow,” Wise said. “Being my second chance at it, I feel like it’s only going to be better than that.”

Leishman shot 69 after setting a 36-hole tournament record previously shared by Tiger Woods. The 34-year-old Australian had a career-best 61 in the opening round.

Wind gusted above 25 mph at times after two rounds of calmer conditions and lower scores on the treeless, links-style layout a few miles south of downtown Dallas. The Nelson spent the previous 35 years at a more conventional venue in suburban Irving.

One illustration of the struggle came late with the strong crosswind at the par-4 18th, where five of the top six on the leaderboard had bogey or worse.

Wise played in more wind than Leishman and most of the other leaders Friday when it kicked up in the afternoon, and still said Saturday’s conditions were significantly different. And he still said it was fun.

“I love playing really firm golf courses because it brings a lot of thinking in,” Wise said. “I didn’t have quite as many drivers as I had the last couple of days because it was firmer.”

With one notable exception: his 402-yard drive on the downwind par-4 ninth. All Wise had left was a flip wedge on the 504-yard hole, and he made the 11-foot putt.

“It’s pretty cool to be able to make decisions like that and kind of use my advantage, which is my driving when I can,” he said. “But you still got to play safe. This course has enough teeth where you can’t just bomb driver everywhere.”

Spieth was hoping for the teeth on one of his home courses, but couldn’t take advantage of his experience with it. The Dallas native even admitted he’s still struggling to figure out the greens.

The 24-year-old had three birdies and three bogeys and is in danger of going another year without surpassing his best Nelson finish – a tie for 16th when he was a 16-year-old high school junior in 2010.

“I finish 16th tomorrow and people are going to say, ‘What’s wrong?”’ said Spieth, a three-time major winner. “It’s funny how expectations change. But certainly my own do as well.”

Wise said the difference with strong wind on the course co-designed by Ben Crenshaw showed up quickly when his tee shot on the par-3 second hole ended up 30 yards right of his target.

For Leishman, it was the long ninth hole when he hit a 3-wood to try to land short of a fairway bunker 340 yards away but “went straight in it.”

“That’s a bit of getting used to,” the three-time tour winner said. “Normally I can’t hit my driver anywhere close to that.”

After 41 scores of 66 or better in the first two rounds, there were just two Saturday. Charles Howell III shot a 65 for the lowest and only bogey-free round of the day.

“It’s a lot different,” Jones said. “This is what the course is built for.”

Leishman, who still has a chance to be a wire-to-wire Nelson winner two years after Sergio Garcia did it, retook the lead with birdies at Nos. 14 and 15. Wise answered at 16 and 17 before his three-putt at 18.

“He’s a solid player for I heard this morning he’s only 21. I didn’t realize that,” Leishman said. “I guess I was in high school before he was born. You hear guys talk about that all the time, but I’ve never said that, I think.”

The Aussie will be dueling Sunday with the youngster, born in South Africa but raised in the United States.

“It’s easy for me to get ahead of myself,” Wise said. “I’m getting some great experience for a kid this young. It’s only going to serve me well down the road.”