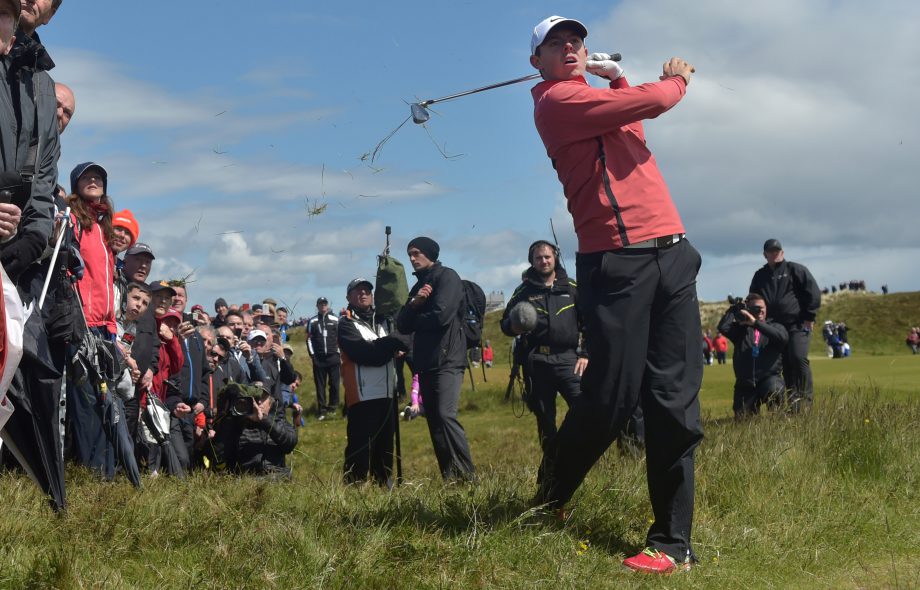 The Northern Ireland star looked bewildered as he shot a 9-over-par 80 – his worst score of the season – in Thursday’s opening round of the Irish Open. He fell to the bottom of the morning’s leaderboard and finished tied for 150th place at the end of the day.

Many other players struggled amid gales and pounding showers at Royal County Down, a links course in the shadow of the Mourne Mountains famed for its stunning seaside setting, blind approaches and undulating greens. But the scores improved as the winds eased somewhat and the afternoon sun came out.

Taking advantage were Irish veteran Padraig Harrington and unheralded Maximilian Kieffer of Germany, who both shot 67 to share the lead.

The 43-year-old Harrington, who hasn’t won on the European Tour since 2008 but took the PGA Tour’s Honda Classic in March, said understanding the strong winds gave him a tactical advantage. He birdied five of the final eight, but edged an 8-foot putt for birdie just wide on the final hole. Had he made it, Harrington would have tied the 76-year-old course record.

“There’s plenty of ways to get around this golf course in the wind. I was happy to see it,” said Harrington, who won the Irish Open in 2007.

The 290th-ranked Kieffer, 24, was in the last group to start and not expected to contend. But he eagled the par-5, 525-yard 12th hole on his way to one of his best rounds since finishing second in the 2013 Spanish Open.

McIlroy bogeyed half of the course and couldn’t hit a birdie. The sellout crowd of nearly 20,000 gasped with each miss, and offered relieved applause as he narrowly two-putted his final hole for par.

“My poor iron play led to missed greens, which led to giving myself a lot of 8- to 12-footers for pars, and that led to missing all of them,” said McIlroy, who described his play as “worse as I got closer to the green.”

He had played three practice rounds at the course south of Belfast after failing to make the cut at Wentworth last weekend, but the unexpected extra practice didn’t help his play.

If McIlroy fails to make the cut Friday, it would be his third straight early exit at the Irish Open. He’s never come close to winning the event in eight tries.

McIlroy, whose Rory Foundation children’s charity is hosting the Irish Open for the first time, said he might need to shoot a 66 on Friday to make the cut. That would match the course record set by Jimmy Bruen in 1939.

McIlroy said his first goal is to give Northern Ireland fans “something to cheer about and not just have sympathy claps.”

Local fan favorite Darren Clarke, who has rarely contended since winning the 2011 British Open, also struggled in shooting a 75.

“We all want to play well,” he said, “but sometimes the ball doesn’t realize that.”