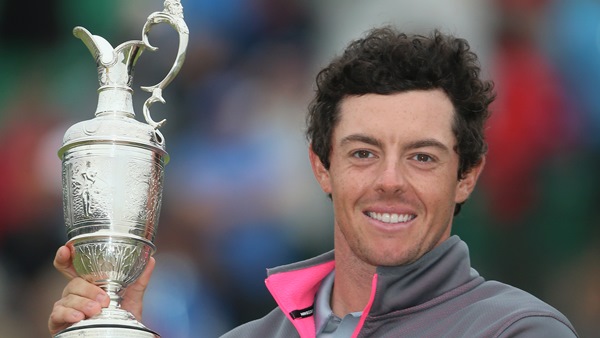 HOYLAKE, England -Rory McIlroy had to work a little harder and sweat a little more. No matter. Just like his other two majors, this British Open was never really in doubt.

With two key birdies around the turn, and a powerful tee shot at just the right moment, McIlroy completed a wire-to-wire victory Sunday at Royal Liverpool and captured the third leg of the career Grand Slam.

The 25-year-old from Northern Ireland joined some elite company beyond the names on the silver claret jug.

Jack Nicklaus (23) and Tiger Woods (24) are the only other players to capture three different majors by the time they were 25. McIlroy won the 2011 U.S. Open at Congressional and the 2012 PGA Championship at Kiawah Island, both by eight shots.

“It feels incredible,” McIlroy said before heading out to collect the oldest trophy in golf. “Today wasn’t easy. A few guys were making runs at me. I just needed to stay focused and stay in the present and really concentrate on what I was doing out there.”

This could have been another romp except for a shaky stretch early for McIlroy, and solid efforts from Garcia and Fowler.

Garcia pulled within two shots with four holes to play until he put his tee shot in a pot bunker just right of the 15th green. His first shot failed to get over the 4-foot sodden wall and rolled back into the sand. He made bogey, and two birdies over the final three holes were not enough. Garcia shot 66 and was runner-up in a major for the fourth time.

Fowler, playing in the final group for the second straight major, never got closer than three shots. He played bogey-free for a 273.

It was the first time ever that two straight majors were won wire to wire. Martin Kaymer did it last month at Pinehurst No. 2, winning the U.S. Open by eight shots.

McIlroy, who finished at 17-under 271, wasn’t the only big winner Sunday.

Boy Wonder made good on the bet with a brand of golf that had him marked early on as golf’s next great player. The victory moves him to No. 2 in the world, perhaps on his way to regaining the No. 1 ranking that two years ago looked as if would be his for years to come.

Ontario-born David Hearn shot 71 in the final round to finish at 3-under and tie for 32nd along with the likes of Hunter Mahan, Jordan Spieth and Louis Oosthuizen.