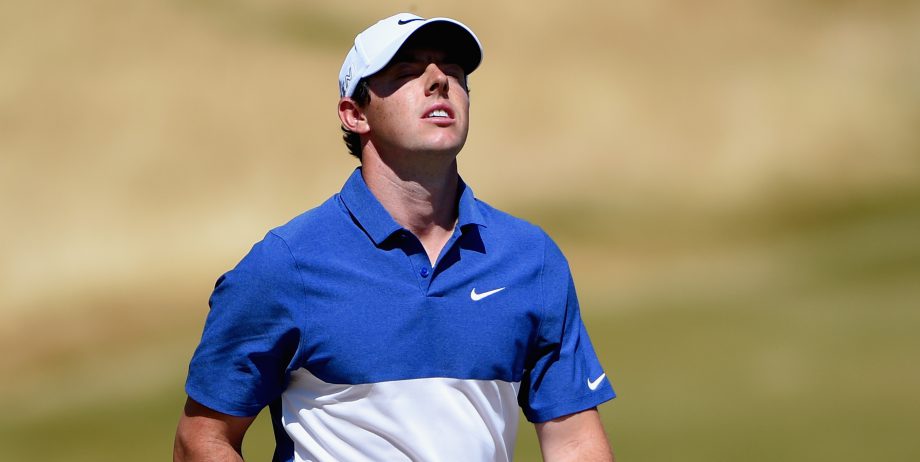 Rory McIlroy pulled out of the British Open at St. Andrews on Wednesday with an ankle injury, the first time in 61 years the defending champion will not be playing.

McIlroy made the announcement by posting a photo on Instagram that showed his left ankle in an air cast, propped up as he watched Wimbledon on television. That will be his only view of St. Andrews next week, a blow to the world’s No. 1 player and to the oldest championship in golf.

After much consideration, I have decided not to play in the Open Championship at St. Andrews. I’m taking a long term view of this injury and, although rehab is progressing well, I want to come back to tournament play when I feel 100% healthy and 100% competitive. Thank you for all your support and best wishes. I hope to be back on the course as soon as I can…. In the mean time, come on Andy!!!

McIlroy said he ruptured a ligament in his left ankle over the weekend while playing soccer with friends in Northern Ireland. He was hopeful that he would recover in time for The Open, but decided two days later it was not worth risking a full recovery.

“After much consideration, I have decided not to play in the Open Championship at St. Andrews,” McIlroy said. “I’m taking a long-term view of this injury and, although rehab is progressing well, I want to come back to tournament play when I feel 100 percent healthy and 100 percent competitive.”

He said he hoped to be back to golf as soon as he could.

Ben Hogan in 1954 was the last British Open champion who did not defend. Hogan, who was nearly killed in an automobile accident in 1949, won the only British Open he played in 1953 at Carnoustie.

“We are naturally very disappointed that Rory will be unable to defend his title at St. Andrews next week,” the R&A said in a statement. “Rory will play in many more Open Championships and our primary concern is for his complete recovery.”

He was replaced in the field by Russell Knox, who grew up in Inverness in the north of Scotland and will be making his Open debut.

Still to be determined is how long the ankle injury keeps McIlroy out of golf.

His absence makes Jordan Spieth the favorite at St. Andrews in his quest for the Grand Slam. Spieth is only the fourth player since 1960 to have won the Masters and the U.S. Open in the same year.

“We want him back. Everybody does,” Spieth said Tuesday at the John Deere Classic. “It’s unlucky, it’s unfortunate, and I’m sure he’s taking it harder on himself than anybody else. But I don’t think he did anything wrong, it was just an unfortunate situation. And hopefully, he rebounds quickly and gets back right to where he was.”

Spieth will have a chance to replace McIlroy at No. 1 in the world if he were to win at St. Andrews.

Tiger Woods is the only other No. 1 player to miss a major championship – the British Open and PGA Championship in 2008 recovering from reconstructive knee surgery, and the Masters last year when he had surgery on his back.