Rose with 63 to tie Furyk at Firestone 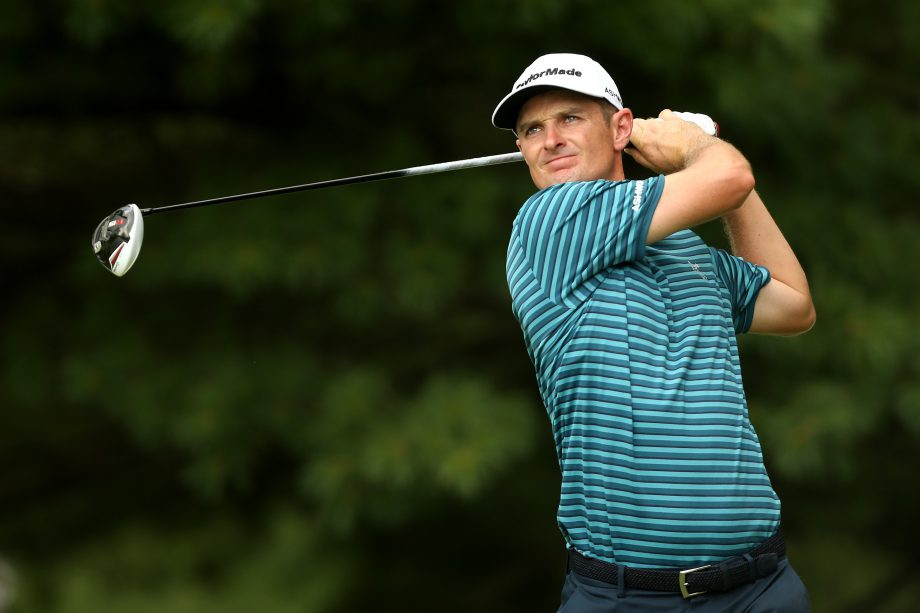 AKRON, Ohio – Justin Rose never lost belief that he was playing well even as he went 30 consecutive holes without making a birdie in the Bridgestone Invitational.

The streak ended on his first hole Saturday.

And he kept right on going.

Rose had a good start and a strong closing kick with three birdies over his last four holes, including a 40-foot putt on the 18th hole. It was the longest putt he has made all year, and it gave him a 7-under 63 and a share of the lead with Jim Furyk.

“I guess that shows it just evens out, really, if you can stay the course and stay patient, kind of believe that you’re going to get your run eventually,” Rose said. “Yesterday, I actually played really well. … It just didn’t happen yesterday. But came into today with a belief that I was still playing well.”

Furyk, who had a four-shot lead going into the weekend, finished with six straight pars and he had to work hard for the last one. After spending much of the back nine in the rough, he finally drilled one right in the middle on the 18th hole, only for it to settle in a sand-filled divot.

“I finally hit a good drive on 18 and I’m licking my chops to get down there, knowing I’m going to have a short iron in my hand,” Furyk said. “Not only was I in a divot, it was a pretty bad lie. I felt like there was raised sand behind the ball.”

His only option was to punch an 8-iron that he tugged slightly into the collar. His chip rolled out through the green, and he holed a 12-foot putt for his par and a 69 to join Rose in the lead at 9-under 201.

Furyk was more excited than usual, pumping his fist when it fell.

Being tied for the lead wasn’t that big of a deal for someone like Furyk, who has been around long enough to know the tour stopped giving charity money away for a 54-hole lead. And while every shot counts over 72 holes, this was more a matter of finishing the right way. He made bogey on his last hole the previous two rounds.

“That always leaves a little bit of a sour taste, and I didn’t want to do that three days in a row,” Furyk said. “Knocking the putt in was nice. In the whole scheme of things, it’s nice to have the shot. It’s just a good way to finish off the day.”

They were two shots ahead of Shane Lowry of Ireland, who had a 67.

Steve Bowditch also had a 63 earlier Saturday and was in a group four shots behind that included Ian Poulter (65), Henrik Stenson (68) and Bubba Watson (69). Watson had a chance to get closer to the lead until he missed a short birdie putt on the 16th and dropped a shot on the next hole.

Another shot back were Graeme McDowell (69), Brooks Koepka (68) and Robert Streb (68). McDowell didn’t make a birdie after the eighth hole and closed with a bogey, while Koepka was poised to move closer to the leaders until his bogey-bogey finish.

Still, what Rose did Saturday was enough evidence that any number of players to have a chance. Rose was six shots behind going into Saturday. There were 10 players separated by five shots going into Sunday.

Masters and U.S. Open champion Jordan Spieth was not among them. Only his putting kept a 72 from being worse. Spieth struggled to find fairways – he still hasn’t had a birdie putt on the par-5 second, the easiest at Firestone, this week – and didn’t give himself many birdie chances. He wound up nine shots behind, all but assuring that Rory McIlroy will be No. 1 going into the PGA Championship next week.

“Very frustrating today. It was a poor performance,” Spieth said. “Didn’t have very good control of the ball. I putted it OK, but other than that, very much struggled. I’m going to need to look for some answers tomorrow and into next week.”

Rose had no such problems.

He made a pair of key par saves on the front nine that kept the momentum from his birdie-birdie start, and he didn’t come seriously close to a bogey the rest of the way.

As for the birdies? They were overdue. Rose made birdie on the sixth hole of the opening round, went the last 12 holes without another, and then made 17 pars and one bogey on Friday. He started fast Saturday, and finished even better.

Furyk remains in position for his first, and it could happen at no better place than Firestone, the course where he was denied victory in 2001 after a seven-hole playoff with Tiger Woods and in 2012 when Furyk made double bogey on the last hole.