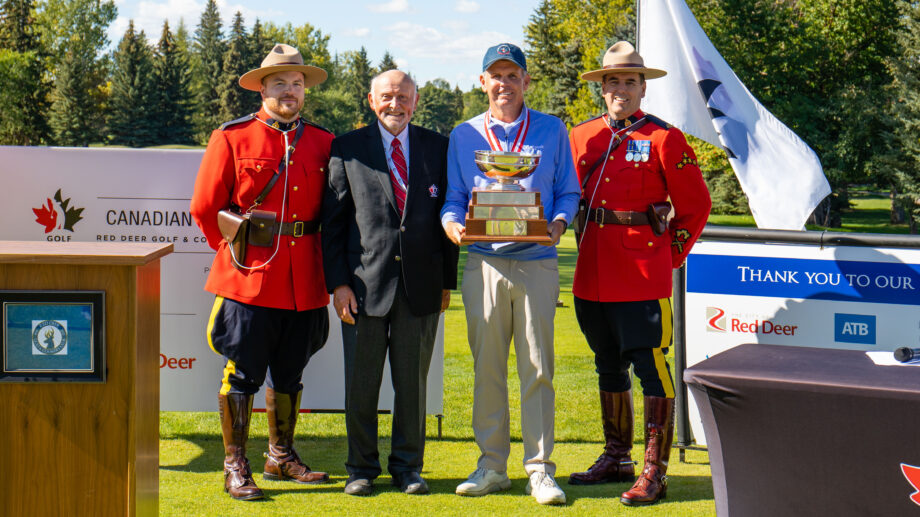 RED DEER, Alta.  – As the saying goes, there’s power in momentum. It’s a saying that Rusty Strawn knows all too well after securing back-to-back victories this September at the U.S. Senior Amateur Championship in Marion, Mass., and the Canadian Men’s Senior Championship, presented by BDO in Red Deer, Alta. Nine days separated the two wins. Needless to say, the McDonough, Ga. resident is going to need a bigger trophy case.

Heading into the final round at Red Deer Golf and Country Club, the 59-year-old shared the lead with fellow American, Mike Lohner of Southlake, Tex. The pair went back and forth throughout the day, both beginning their round at 5-under-par. It wasn’t until the back nine when Strawn hit a groove, birdieing three of his last eight holes to pull away from the pack to secure the 60th Canadian Men’s Senior Championship title.

“I was very fortunate last week to win the United States Senior Amateur,” said Strawn. “And of course, by doing it I got the exemption to the United States Mid-Amateur, and I told the people at the USGA, I said, there is no way I’m going to miss the Canadian Men’s Senior. I absolutely love it here.”

To celebrate, Strawn popped a bottle of champagne and toasted the volunteers, Red Deer Golf and Country Club staff, and fellow competitors “To my new Canadian friends!”. He also commented, “having my picture taken with the Royal Canadian Mounted Police is the coolest picture I’ve ever taken.”

Strawn was also highly complimentary of the host club.

“It’s just been a wonderful week here in Red Deer,” said Strawn. “When I arrived here for my practice round on Sunday – probably the strength of my game is my putting – and when I rolled those first few putts on the practice green, I was like, I have nobody but myself to blame because they were absolutely awesome.”

Low Canadian Ken Griffith, who is a member at Red Deer Golf and Country Club, placed third on the leaderboard, carding a total score of 288, his best finish ever at the national championship.  Fellow members, Grant Lee and Peter Innes also competed in the tournament and finished T7 and T15, respectively.

Frank Van Dornick ran away with the Super Senior division securing the title and the Governor’s Cup by 10 strokes.