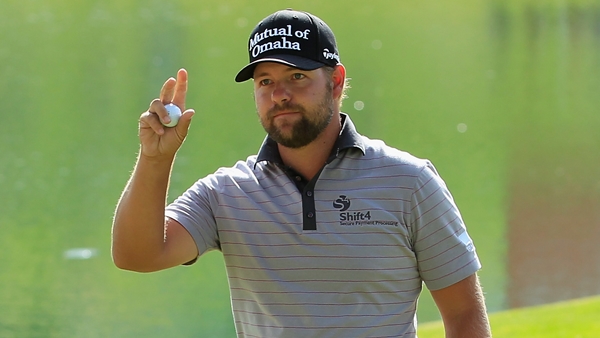 CROMWELL, Conn. – Ryan Moore is in contention in the Travelers Championship – again.

Moore had an eagle and two birdies Saturday in a bogey-free 4-under 66 to take a one-stroke lead over Aaron Baddeley into the final round.

The 31-year-old Moore had a 13-under 197 total at TPC River Highlands after opening with rounds of 63 and 68. He won the CIMB Classic in Malaysia at the start of the season in October for his third PGA Tour title.

“Today was a great examples of `It doesn’t have to be pretty’ to shoot a great golf score,” Moore said. “I honestly didn’t feel great all day hitting the ball, but drove it well enough to kind of keep myself out of trouble.”

Moore eagled the par-5 sixth, holing a 37-foot putt from just off the green, to take the lead early in the afternoon. He has made one eagle in each of his three rounds this week.

The eagle on No. 6 was something of a lucky break, Moore says, as his drive was off target.

“I hit it right off the tee, quite a bit right and straight into the trees, which is not a good place to be, and obviously walking up I did not think I was going to have a shot at all,” Moore said. “Just planned on pitching out almost sideways with the way the rough is. And apparently got a really good bounce and chased way down the cart path, and I was actually still sitting on the edge of the cart path and I was only maybe 230 yards out. So it had gotten pretty far down there.”

Moore chipped in for a birdie on No. 11 to move to 12 under and break a four-way tie for the lead.

No one who has held a share of the third-round lead has won the Travelers since Stewart Cink in 2008.

Baddeley had six birdies and a bogey in a 65.

“Around here you feel like you should birdie every hole. There are a lot of birdie holes out there,” said Baddeley, the Australian who won the last of his three PGA Tour titles in 2011. “But you have to be patient.”

“It’s been a solid season so far,” Garcia said. “There’s no question I’d like to have played better at the Masters and last week (at the U.S. Open).”

Masters champion Bubba Watson was nine strokes back after a 67. He won in 2010 at River Highlands.

Former Stanford star Patrick Rodgers, making his pro debut, was 4 under after a 71.

Defending champion Ken Duke was 2 under after a 71.

Graham DeLaet, the sole Canadian on the field, carded 71 to go 1 under and hold a share of 67th heading into the final round.