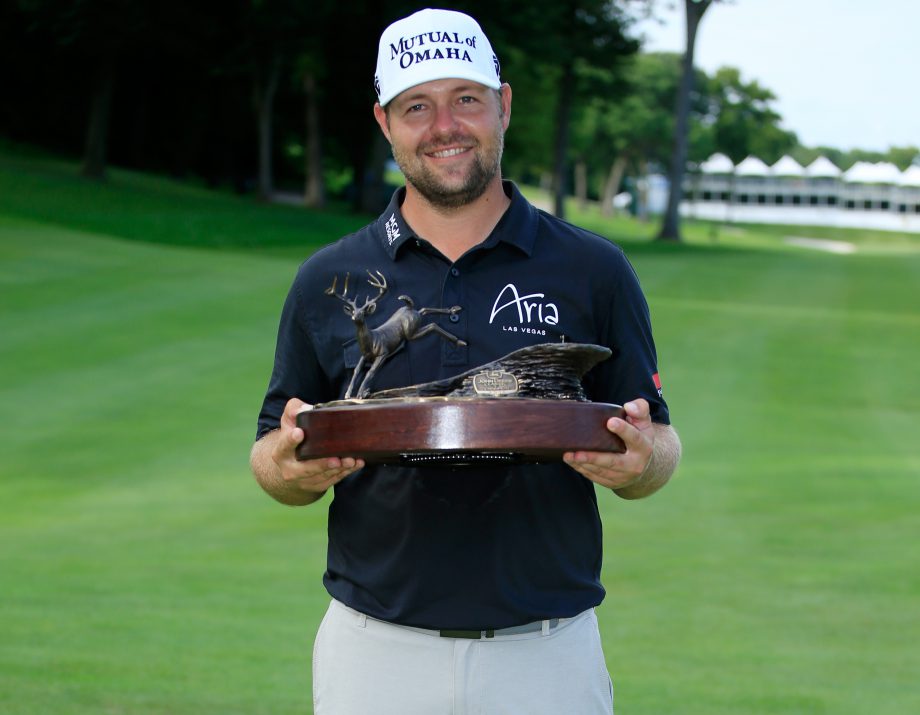 SILVIS, Ill. – For all the late pars and the closing run of 46 holes without a bogey, Ryan Moore thought the key to his victory Sunday in the John Deere Classic was a 24-foot birdie putt on the fourth hole.

It moved him to 20 under and kept him two strokes ahead of Morgan Hoffmann, who was about to birdie the fifth hole.

“That was huge to get another birdie early, just to show the guys behind me I’m not messing around,” Moore said. “The worst thing to do is to be even or 1 over after five or six holes. Then all of a sudden you’ve got 10 guys thinking, ‘All right, I can go get this today.'”

With Moore making three birdies on the front nine and another on the 10th hole en route to a 4-under 67, they had no chance. He won his fifth PGA Tour title by two strokes over Ben Martin.

The 33-year-old Moore finished at 22-under 262 at TPC Deere Run, making only one bogey in 72 holes. He won for the first time since successfully defending his CIMB Classic title in Malaysia in 2014.

“Every win is a little different,” Moore said. “I like how steady this was, with no bogeys on the weekend.”

Martin had three straight back-nine birdies in a 68.

“I never got a whole lot going,” Martin said. “I just told (Moore), ‘You couldn’t make one bogey out there for me today?’ Hats off to him for just a solid round of golf. I don’t think he really ever sniffed a bogey.”

Moore birdied Nos. 2, 4, 9 and 10 and closed with eight pars. He had a five-stroke lead when Hoffmann bogeyed the 12th hole. Martin, playing with Moore in the final twosome, birdied Nos. 12-14, but couldn’t get closer than two strokes. Martin parred his last four holes, and Hoffmann his final six.

“I just wanted to make a putt, which didn’t happen all day,” Hoffmann said. “In the middle of the round, it kind of went sideways.”

Moore hit 13 of 14 fairways in the final round and 14 of 18 greens in regulation, including the 18th, which he two-putted from 47 feet for the victory. He opened with three straight 65s in the event thrown off schedule by rain Thursday and Friday.

Jordan Spieth chose not to defend his title because he didn’t think it would be appropriate in light of his decision to skip the Rio Olympics.

Wesley Bryan, the leader Friday when play was suspended, tied for eighth at 14 under after his second straight 70. He earned a PGA Tour card last week with his third Web.com Tour victory of the year. Bryan was joined by Abbotsford, B.C., native Adam Hadwin who carded eight birdies through the final day of competition to move into his share of eighth.

NCAA champion Aaron Wise followed his third-round 63 with a 70 to tie for 16th at 12 under in his PGA Tour debut as a pro. The former Oregon player won a PGA Tour Canada event two weeks ago in Edmonton, Alberta.