Ryder Cup, not flight to space, appeals to Sullivan in 2016 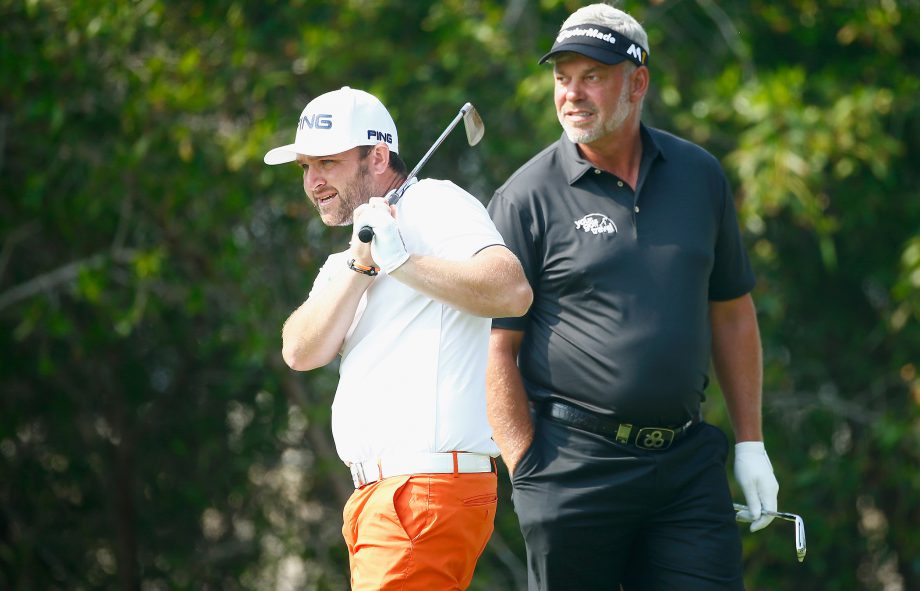 ABU DHABI, United Arab Emirates – A flight to space in 2016 doesn’t appeal to Andy Sullivan. For the English golfer, this year is mostly about one lofty ambition – getting in Europe’s Ryder Cup team.

And he’s going about it in the right way.

Sullivan has caught the eye of European captain Darren Clarke at the Abu Dhabi Championship this week, shooting 5-under 67s in the first and second rounds playing alongside the Northern Irishman to set the clubhouse target at 10 under. It continues Sullivan’s good form from last week when he won three points from three matches for Clarke in Europe’s big win over Asia in the EurAsia Cup in Malaysia.

“It’s good to do it face-to-face,” Sullivan said, “but I think Darren knows what I’m capable of.”

Clarke has acted as a mentor to Sullivan since the latter turned professional in 2011, so they are close. It meant Sullivan – known for his big smile and easygoing nature – has been able to joke around with Clarke this week in his latest Ryder Cup audition.

“He’s got 60 on his ball and, on the first tee, I said I didn’t realize you put your age on the ball,” Sullivan said, laughing. “I just try and have a bit of to-ing and fro-ing. It was good fun … I think he just enjoys taking the mick out of a short, fat guy.”

Clarke gave Sullivan a friendly warning that he might be taking it too far, saying: “He has completely taken the mick out of me for two days and I have told him that if he keeps this up, a (captain’s) pick is out of the question.”

The way Sullivan is playing, he’ll be qualifying automatically to play at Hazeltine in September.

He won three European Tour titles in 2015 – two in South Africa and the other by nine shots in Portugal – and pushed Rory McIlroy to the last hole in the season-ending World Tour Championship in Dubai. After a slow start to his professional career, Sullivan rose to prominence in 2014 by making a hole-in-one at the KLM Open in the Netherlands that won him an expedition to space courtesy of a tournament sponsor.

The 100-kilometer, suborbital flight could be available this year but Sullivan is set to turn it down.

The man who once stacked shelves at a supermarket in the early-morning shift for 6 pounds ($8.60) an hour to fund his amateur career has risen from No. 150 in the world at the start of 2015 to his current ranking of No. 37. An invitation to the Masters, for his first appearance at Augusta National, should arrive next month.

With the Ryder Cup also a distinct possibility, things are looking up for a player who – according to Clarke – has everything needed to succeed.

“He is a quality ball striker,” said Clarke, who compares Sullivan to 1991 Masters champion Ian Woosnam. “There are lots of brilliant, young kids out here but not many of them move the ball both ways and with different trajectory. He does it all.

“A lot of kids don’t see that, they hit it as hard as they can and as far as they can and go from there. Sully is hitting a draw off one tee then a cut the next. I love playing with people like that, combined with the fact he is a really good kid. He wants to succeed and is definitely moving down the right path.”

With an appraisal like that, Sullivan looks a certainty for Hazeltine no matter what happens over the next nine months.