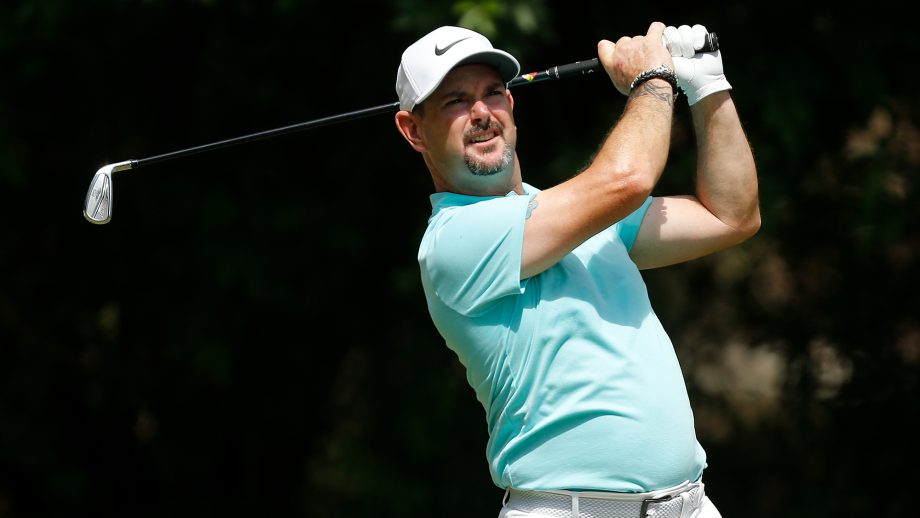 HILTON HEAD ISLAND, S.C. – Rory Sabbatini shot a 7-under 64 for his lowest round ever at Harbour Town Golf Links and a two-stroke lead Thursday in the RBC Heritage, with top-ranked Dustin Johnson five shots behind.

The talk leading up to the tournament was of the return of Johnson, the South Carolina native who grew up about three hours northwest of here yet had not played in the Palmetto State’s lone PGA Tour stop since 2009. But it was Sabbatini who quickly moved to the top in perfect, windless conditions on what’s typically one of the most wind-swept layouts of the year.

Matt Kuchar, Billy Horschel, Chesson Hadley and John Huh shot 66s. Johnson had a run of four straight birdies in the middle of his round, but ended up with a 69. He was tied for 20th.

Sabbatini, starting on No. 10, birdied four holes on his front nine. He made a 52-foot putt on the par-3 14th and put his approach on No. 18 – the Pete Dye course’s signature hole with the lighthouse in the backdrop – to about 7 feet to set up another birdie.

“I think anytime you can birdie 18 on this golf course, it’s key because 18 is not a very forgiving hole,” he said.

Sabbatini, the last of whose six PGA Tour wins came in 2011, kept up the strong play with three more birdies coming in. He closed the round with consecutive birdies on his final two holes, the eighth and the ninth.

“All things considered, the course is probably as easy as I’ve ever seen it play,” Sabbatini said.

Sabbatini wasn’t sure he’d even tee it up after hurting his back Sunday while working on his stance. He received treatment every day since and decided to go as long as he good. Turns out it was all the way to the end. Sabbatini even got a bonus on his final tee box when he finally got his back to pop after stretching on No. 9 to make himself feel better. “And it kind of releases everything for the closure of the last hole,” he said.

Sabbatini surpassed his previous Harbour Town low of 66 in the 2009 final round when he tied for eighth, his best showing in eight previous appearances.

Johnson, ranked No. 1 for more than a year, won at Kapalua and has four other top 10s since January including last week at the Masters where he tied for 10th in the year’s first major. He looked to continue his strong play at Harbour Town where he posted 10 birdies to one bogey during Wednesday’s pro-am.

However, things did not come as easily for Johnson in his first time here since 2009.

Johnson took bogey on his second hole, the 11th. He caught fire in mid-round, starting a run of four straight birdies on the 18th hole. But Johnson missed 8-foot par putts on the fifth and sixth holes and took one more bogey on his closing hole, the ninth.

“I haven’t played here in a while, so it’s definitely a little bit different being here,” Johnson said.

Kuchar, playing with Johnson, took advantage of the mild conditions to get himself in early positon for his second tartan winner’s jacket.

Kuchar, ranked 21st in the world, stood at 1 under after his first 11 holes before birding four of his final seven – all on putts of 15 feet or less – to move into second.

Kuchar said the move from Augusta National’s massive greens to Harbour Town’s tiny greens was a big difference. “Once you get on these greens, you feel like you have a chance to make putts,” he said. “To come from last week where getting on the green doesn’t mean much, you still have a lot of work to go.”

Kuchar tied for 28th at the Masters last week.